At 11am on Sunday 25th November, 1242 participants set off in four waves to undertake the third Western Power Distribution Derby 10 Mile road race. The field included twenty members of Grantham Running Club taking part in the penultimate round of the club’s 2018 Grand Prix Series.
The conditions were good: dry, fresh, and around 6.5 degrees Celsius. Moreover the course lived up to the promise of being fast, flat, and scenic. Starting at Pride Park Stadium, which proved an ideal venue, the race soon headed to the river path, continuing onto the A6 cycle path and then through the scenic Elvaston Castle Country Park, before returning back to Pride Park via the river path.

First home for GRC in 28th position was Chris Limmer in 1:01:39. Evidently still recovering from a heavy cold, Chris ran a controlled race and was left wondering whether if, fully fighting fit, he could have beaten his PB of 59:20 set back in December 2013. First woman home for the club was Penny Hodges who ran an equally fine race to clock 1:14:41, finishing 28th female and eleventh in her age group. Frustratingly just shy of the elusive 70% silver certificate earning age grade, she was pleased to establish an official 10 mile PB having previously only run the distance in a multi-terrain race.
Flushed with confidence after his eye catching performance at the Great Eastern Half Marathon in October, Matthew Williamson attacked it at faster than his 10K PB pace, was able to hold on for the additional 3 ¾ miles, and was rewarded with a fantastic 1:02:42, exactly three minutes faster than his old PB. As at Peterborough, Joe Clarke and Dean Riggall followed Matthew home and both celebrated new personal bests. Joe improved his old mark by around 50 seconds with 1:03:37 and Dean took a scarcely believable 5 minutes 40 seconds off his previous best with 1:04:41, his 1:07:41 at the multi-terrain Peterborough 10 a week ago an indicator that his old 10 mile best time was due serious revision.

Richard Payne, on his road 10 mile debut, had a strong race, battling to and fro with club mate Rob Howbrook. He beat Rob on the line clocking 1:09:06, only to discover that Rob’s official time was 1:07:46. Having erroneously been put in the second start wave, Rob passed 397 runners with not one passing him to clock 1:07:46 - the fastest V60 time of the day and his second ever fastest ten mile time. However he unfortunately couldn’t claim the V60 prize as current rules dictate that this is based on gun time position, so has had to settle for third.
The ever incredible Julie Braker was the second GRC woman home, running 1:25:20. This not only won her the V65 age category by just shy of ten minutes, it currently puts her #2 in the UK for 2018 over ten miles for the V70 age group. Another runner who had cause to celebrate was Claire Fritz, who put aside the disappointment of her injury affected run at the Peterborough 10 to establish a 10 mile best time of 1:49:23. Tracy Webb actually ran a little slower than at Peterborough, but her road race time of 1:38:37 at Derby establishes her official PB.
GRC had a number of first timers to this distance that all put in excellent performances. Stefan Latter was over the moon with his 1:11:38; Mark Edwards loved the course and will be back again to attempt to better his 1:24:06. Nichola Webster was third GRC woman home in 1:33:39; Kate Marshall followed in 1:41:42. Magaretta Murray (1:46:43) ran all the way with a ten mile veteran Yvonne Buckley, who put on a sprint finish to pull clear and clock 1:46:47 and was very pleased to be just over a minute outside her PB set five years ago. Rebecca Angel put in a determined sprint finish to beat three other runners on the line, clocking 1:50:18. She was followed by Edina Burns who also sprinted to the line to finish in 1:51:57.

There were two other finishers from GRC: Joanne Moore ran her first 10 mile race in eight years, finishing in 1:38:57, enjoying the course and the post race coffee that followed. Some way up the road finished Rob McArdle in 1:14:34, earning himself a UK ranking for his age category. This earned him the distinction of being the only runner in the club to have such a ranking over 5K, 5 miles, 10K, 10 miles, half marathon, 20 miles and marathon in 2018.
All finishers received a medal, technical t-shirt, a gift from Western Power and a bottle of Water.
The GRC participants were near unanimous in their praise for the race organisation and enjoyable course and would look to return for the 2019 race.
The 2018 race was won by Andy Harding of Belper 10:20 Triathlon Club in 53:59, with the women’s race won by Tamara Armoush of Birchfield Harriers in a new course record 58:12. 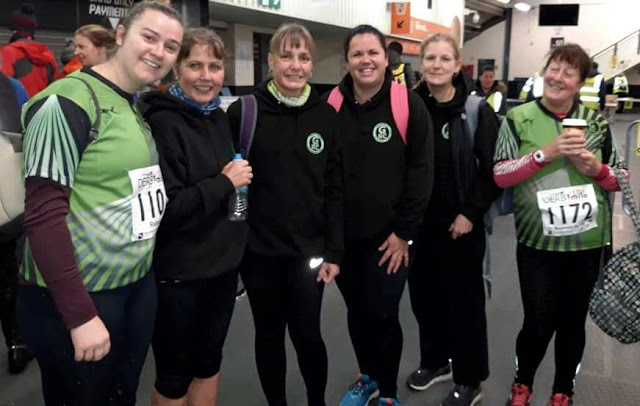 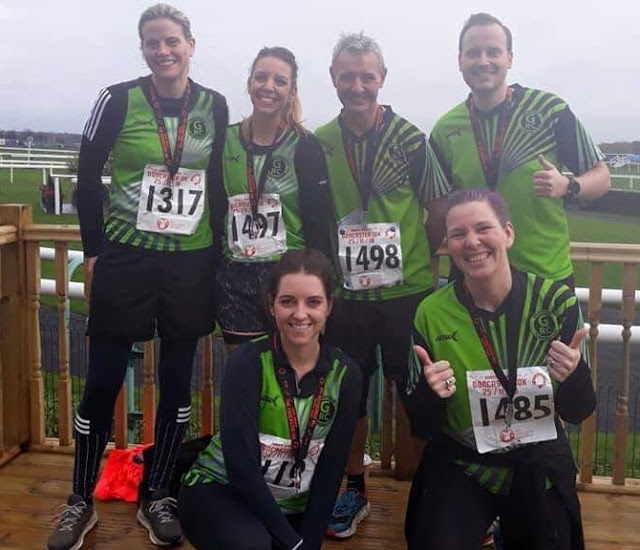 Starting at the racecourse, the course ran through the heart of the town (much to the bemusement of some of the locals).  Part of the route was in an out and back arrangement, so the GRC contingent were able to look out for fellow club mates coming past in the opposite direction, with all the accompanying high fives and shouts of encouragement evoking a great feeling of team spirit.

Runners then had the thrill of finishing right in front of the main grandstand on the racecourse, with the crowds shouting them down the home straight.  They were all then rewarded for their endeavours with a smart medal, a welcome hot chocolate and a slightly less obvious snack for an athlete, a pork pie.

It was commented upon that the start of the race was very congested due to the narrow routes which meant that those at the back had a relatively slow start.  However, the route was relatively flat which meant a number of GRC members were still able to achieve personal bests and overall the route was fast and favourable.

First back for GRC was Kevin Kettle who was pleased with his new PB of 44:08, beating his previous best, set in June’s Summer Solstice 10K, by nearly a minute. Next was Richard Taylor in a time of 52:28, a minute outside his PB set at Nottingham earlier in the year.
Vicki Ball romped home in a time of 54:11, knocking over 2 minutes off her previous best time. Sylv Hull followed and was pleased to finish her first 10k race in under an hour at 59:27. Rachel Kettle, who came home in 1:03:38, improved on her previous best 10k time by just under a minute. Louise Kennedy was thrilled to produce a PB of 1:06:14, shaving hard-won seconds off her previous best time.

The race, which had over 2400 finishers and was won by Nick Martin in 30:57 with the first woman Emma Ballantine City of York AC home in 36:52, was given a big thumbs up, being very well organised with great support on the street and in the grandstand, plus a good chance to PB.
Posted by GRC at 25.11.18 No comments:


On Sunday 18th November four members of Grantham Running Club took park in the inaugural Peterborough 10-mile race at Ferry Meadows in Nene Park.  Organised by Living Sport, all proceeds from the race go towards the work they do to improve the health and wellbeing in Peterborough and Cambridgeshire through participation in sport and physical activity.
Under blue skies and ideal temperatures of around 10 degrees, 342 runners set off at 10am. The multi terrain race took runners on a predominantly flat, fast course on a loop around the lakes, woodland, and paths around Ferry Meadows, some of which would be familiar to those who take part in the Peterborough parkrun.
Dean Riggall, substituting for his wife Julie, who unfortunately couldn’t run due to illness, was the first GRC runner home in an excellent 1:07:41 claiming fifteenth place overall and seventh out of sixty in his age category.
Maxine Noble was next to finish with another impressive run, clocking 1:22:32. She finished 107th overall and claimed first place in her age category. Maxine commented on the lovely scenic route but could have done with a bar of chocolate in the goodie bag at the end!

Next in was Tracy Webb, who ran well to clock 1:37:59, finishing 252nd overall and thirteenth in her age category.
Claire Fritz was the fourth finisher home for GRC. Taking part in her first 10-mile race and unfortunately suffering from an injury, she fell just shy of her hopes to break two hours, clocking 2:03:48 to finish 330th and 59th in her age category. Claire commented she hoped for better at the upcoming Derby 10 mile road race but certainly enjoyed the stunning scenery of Ferry Meadows & Nene Valley and will be booking this one again.
Posted by GRC at 18.11.18 No comments: 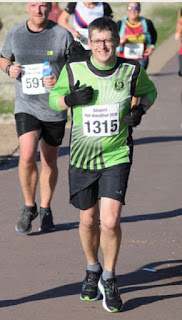 On Sunday 18th November John Nevard returned to his home town of Gosport in Hampshire to join 2000 other runners taking part in the 33rd Gosport Half Marathon. It was John’s first attempt at the 13.1 mile distance, having run several 10K races over the course of the past 12 months.

The two lap course takes runners along the seafront at Lee-on-the-Solent, mainly run on cycle-paths and pavement with the return leg heading along the Esplanade. The course was nice and flat. Conditions were near perfect with blue skies and sunshine, with only a slight cooling headwind to contend with at the turn.

John’s plan was to run an even paced race. With the race going more or less to plan, John finished in a time of 2:04:54, which he was very happy with for a first attempt.

The race was extremely well organised by Gosport Road Runners with a super goody bag and medal, good support around the course and even a samba band to keep runners entertained.

The winning man was Tom Merson of Exmouth Harriers in a new course record of 1:07:33. The winning lady was Lorna Russell of Winchester and District AC in 1:18:52.
Posted by GRC at 18.11.18 No comments: