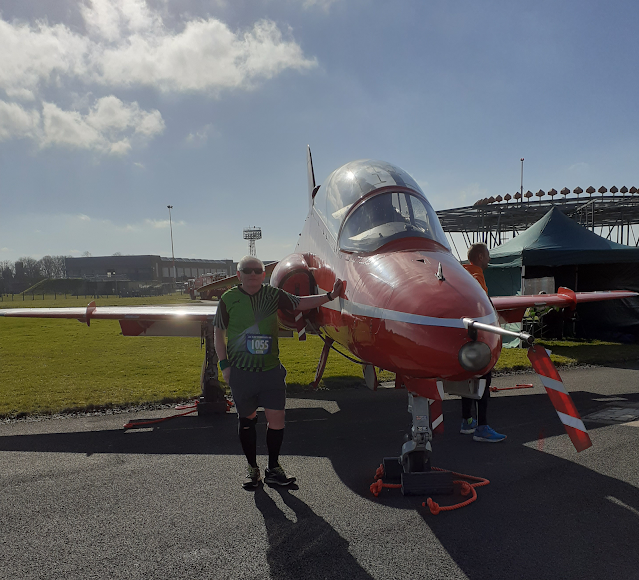 253 runners lined up at the start line braving the chilly wind and benefiting from a warm up from an RAF physical training instructor, prior to a Juno helicopter flying overhead signalling the start of the race.The flat course consisted of two sunny and windy laps around the perimeter of the base mainly on the concrete runway, with an enthusiastic crowd & a cheering RAF mascot giving support at the half-way mark. The windy conditions presented difficulties at times for all the runners, however everyone running battled through, dug deep and all finished the race.

Stephen came in 109th on 54:48 minutes, ninth in his age category and achieving a personal best of nearly three minutes on his previous 10k time. It must have been the joining instructions that he received that insisted that everyone runs hard on the day & being photographed alongside a Red Arrow display plane, that spurred him on to a PB. 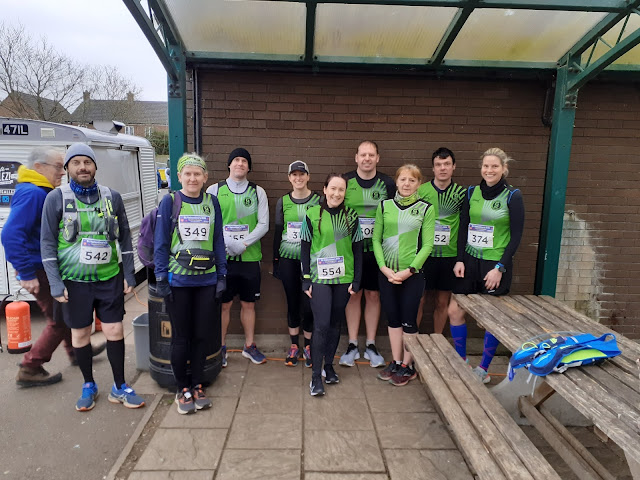 The Stamford Striders' St Valentine 30K (18.6 miles in old money) Race is the flagship event organised by the Club, run each year on the Sunday closest to St Valentine's Day. Nationally recognised as a tough event, it provides a good training run for those planning a spring marathon.

17 members of Grantham Running Club ventured down the A1 to take part in what turned out to be a gruelling event with the endless hills made even more challenging with grim weather conditions and strong winds.

First back for GRC in a storming time of 2:17:02 was Sarah Chynoweth who found the race “grim but strangely enjoyable” and was particularly keen on the snacks at the finish.  Her time knocked an impressive 13 minutes off her previous record set in 2020 and netted her and her partner Jonathan Palmer the honours in the pairs race.  She was also 10th female so an excellent day all round!

Next back was first timer Peter Bonner who was one of the many runners using this race as preparation for Manchester Marathon.  As this was the furthest he had ever raced, Peter was rightly very pleased with a fantastic time of 2:19:16 and even managed to produce negative splits, setting him up brilliantly for his marathon debut in April.

Mikey Brain was next back for the green army in a time of 2:21:15, smashing his previous time, set in 2020 in arguably more favourable conditions by more than 17 minutes.

Sam Dodwell was another runner training for Manchester Marathon and this time round he improved on his 2020 time by more than 10 minutes, storming round to set a new PB of 2:24:09.

Robin Atter made his debut at this race and the distance was the furthest he had ever run, in preparation for the Edinburgh Marathon.  The word he used to describe the course was “barbarous” with endless hills and strong winds.  However, Robin put in a sterling performance and romped round just behind Sam Dodwell in a time of 2:24, especially impressive given then he had only recently recovered from Covid.

Holly Durham, who as a veteran of the race had the dubious knowledge of the challenge to come, was next home for GRC in a time of 2:24:51, a run which gave her an excellent 3rd place in her category.

The next lady home for GRC was Caroline Davis in her 5th time competing at the event.  Her legendary endurance came to the fore as she made light work of the course to post a time of 2:43:43 which gave her 7th position in her category.

Richard Payne made an impressive debut at the event as he works his way to fitness in preparation for the Manchester Marathon.  He was pleased with his time of 2:46:46 and was even able to quicken his pace towards the end.

Philip Crowcroft was another first timer at the event, and this was his longest race so far.  He posted a creditable 2:56:56.

Zoe Wragg took on the challenge for the first time, ahead of Manchester Marathon and played an absolute blinder to complete the course in 3:00:33.  She found the last 5k particularly tough due to fatigue setting in but the presence of the fantastic marshalls and support from GRC members carried her through.  She particularly enjoyed the markers at every km with amusing quotes.

Sylv Hull used the race as a training run (also in preparation for Manchester Marathon) and posted a time of 3:14:29, a little way off her 2019 PB but was pleased to get round in relative comfort.

Belinda Baker and Sammi French ran the majority of the race together, eventually separating towards the end with Belinda pulling away slightly to finish in 3:54:52.  Sammi was thrilled to complete in a time of 4:01:01, due to a feeling of unfinished business with the event.  In 2019. she had to pull up in due to injury so was incredibly happy to get round successfully, despite not feeling quite prepared in the run up to the race.

William Strangeway of Lincoln Wellington won the men’s event, retaining his crown from 2020.

Gemma Hillier-Moses or Charnwood AC won the women’s race in a time of 1:54:28, her first attempt at this event.

All the runners commented on the excellent marshalls, goodies and organisation of the event.

This year the club introduced a great new idea whereby runners were able to opt for a contribution to Tees for Trees instead of t-shirts.  Every year millions of race t-shirts are given away and never worn, ending up in landfill and using resources in their manufacture. Instead of a t-shirt, a tree is planted instead.

With the majority of the club entering the Stamford 30k, on Sunday 13th February, three members of Grantham Running Club decided to make the trip along the A52 to the National Watersports Centre - Holme Pierrepont to take on both the Half Marathon and 10K races.First off at the earlier race time of 09:00, Aaron Smith and Ben Mason. The race strategy; try to make some time on the calm leg and hang on for dear life braving the 26mph gusts heading down the South West flank – and hope to not lose too much time over the 4.5 laps. 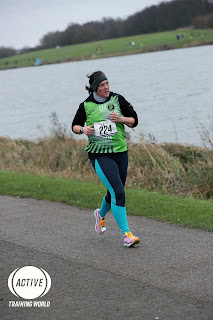 First across the line for GRC was Aaron, comfortably under his target time of 1.30.00 in 1.29.06, finishing in 19th place in a field of 191. Off his Great North Run time by some margin but where he expected to be half way through his marathon training block. Following shortly after was Ben, who, smashing his last half marathon time in 2019 by some circa 4 minutes, came across the line in 1.49.39, in a very respectable 86th place - results both runners were happy with.

The half marathon race was won by Richard Gibbs of Skegness and District Running Club in a fantastic 1.14.09 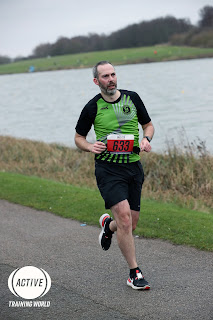 At the slightly later start of 10:00, GRC’s only 10k representative was Emma Hopkinson who, having recently transferred from Lonely Goat Running Club made her 10k debut for the Green Army. Braving the conditions she delivered a strong 2 laps of the famous rowing lake, crossing the line in 1.00.34, 143rd place in a strong group of 210 runners so a huge well done to her. 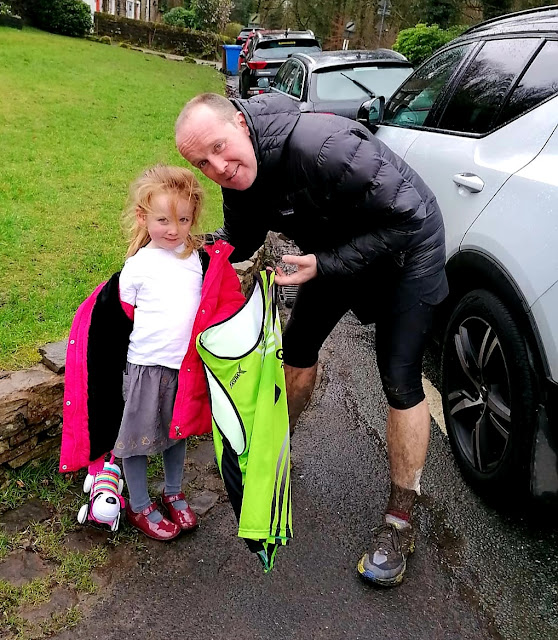 Paul Rushworth travelled to West Lancashire to represent Grantham Running Club in the annual Anglezarke Amble event. The 24 mile run traversed the West Pennine Moors including ascents of Rivington Pike, Winter Hill, Turton Moor, Darwen Moor and Great Hill.  The severe weather forecast largely failed to materialise, although strong winds at the highest point (456 metres) made progress difficult. Rain did fall towards the latter part of the event as Paul ascended Great Hill (381 metres). The final part of the course ran alongside local lakes and reservoirs in an area known as the Little Lake District. Paul finished the race in 4 hours 59 minutes and was rewarded with pea and ham soup and tea and cake at Rivington Village Hall.
Posted by GRC at 12.2.22 No comments: