On Sunday 25th February 14 members of Grantham Running Club’s green army took part in the second annual East Midlands 10K race at the National Water Sports Centre at Holme Pierrepont just outside Nottingham. With clear blue skies it looked lovely but there was a bitingly cold wind that blew straight through you. Despite the cold conditions there was a very large turnout - just three shy of a thousand runners.
The course was flat and involved two laps of the regatta lake alongside the canoe slalom course. With minimal twists and turns it was hoped that fast times would be possible.

First home for GRC was Tony Johnson, still getting back to full fitness following a serious illness and a couple of minutes off where he would like to be, but all the signs are there that he could be in for a good season. Next back was Peter Bonner going sub 42 again with Scott Jones only 30 seconds behind him. Running only his second 10k Russell showed a huge improvement from his debut to finish a further two minutes behind Scott. There were also PB's for Emma Weighill, Claire Fritz and Melanie Taylor. 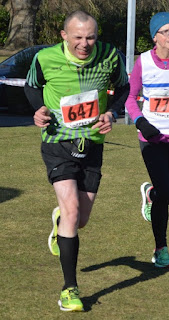 2016 '10 weeks to 10k' graduate Ady Walker represented Grantham Running Club in the Tarpley 20 mile race near Bury St Edmunds in Sussex. The race is named after Bert Tarpley who is a former president of the St Edmund Pacers Running Club. With temperatures only just above freezing point runners seemed reluctant to head outside onto the undulating course in the picturesque Suffolk countryside.

Ady set off aiming for a sub 3 hour finish in his first race at this distance. Feeling strong in the early stages of the race, he reached the 10 mile mark in 1hr 24min (over 5 minutes ahead of schedule). Unfortunately this was to prove his downfall as he found the going tougher from mile 13 and his pace began to drop. In mile 17 cramp set in and a sub 3 Hour finish was now looking doubtful. Trailing runners started to pass Ady on a regular basis and he eventually crossed the line in a time of 3.04.55.

After the race Ady commented “I learned a hard lesson today on the importance of pacing the race correctly and sticking to the original race plan. I went off too fast and then paid the price but on a positive note I have to remember that less than 2 years ago I would struggle to run three miles never mind twenty." Ady is now preparing for his first ever marathon in Manchester on 8th April.


The lighter mornings and longer days are a sign that spring is on the way. For members of Grantham Running Club the races which take place around this time are another sign that spring is almost here. One of these races is the Belvoir Challenge a 15 or 26 mile run around the beautiful countryside which we have pretty much on our doorstep. To make things more interesting the route is only revealed within 2 weeks of the event, though the course is always marked well enough to avoid any navigational errors.
GRC had a number of runners taking part across the two distances which both began and finished in the village of Harby and although the conditions were cold and a bit breezy it was at least dry which for regular runners of this made it an improvement on last years race where the rain later in the morning made it quite the mud fest!
In the 15 mile race there were eight runners taking part. They were led home by Daniel Howson in a very good time of 2:18:45 which placed him 80th out of the 732 that completed the shorter distance. First lady home was Sinead McDonnell who finished in 3:01:13 just outside her 2016 time but still an impressive performance on a course that was quite rutted in places and had its fair share of mud. Next home was Julie Riggall in 3:25:01. Other members embraced the spirit of the event by enjoying the well-stocked aid stations on the course that had lots of local homemade cakes and treats. Finishing together in 3:51:48-3:51:54 were Nicola Cottam, Julie Gilbert, Jacqueline Jacobs and Ros Sadler. They remarked afterwards that about a quarter of the race time was taken up just enjoying the hospitality on route and were full of enthusiasm for what is a great event. Following them in a few minutes later was Paul Durham in a time of 3:57:48.

Eight runners also took on the challenge of the full marathon distance. The longer route went out further to Woolsthorpe and took competitors through long stretches of thick muddy fields, though as with the shorter event the aid stations provided welcome relief and wonderful support. Though it did at least lack quite as many arduous hills as previous editions of the race.
After finishing 3rd last year Chris Limmer was hoping to place highly again this year and was running inside the top 10 at half way feeling comfortable. However disaster struck soon after as the soles of his shoes began coming away. Frustrated and with a few choice words to himself cursing his luck he dropped back but ultimately like others in the race would rather any minor mishaps happen here than in the many races which runners are training for later in the spring. In the end Chris was able regain a few spots in the closing stages finishing in 3:50:58 and in 16th place.
Following Chris closely and in 43rd place was Rob Howbrook who finished in 4:14:33, he was followed by Paul Rushworth in 4:18:54. Mark Hillson followed in 4:35:19 in 74th with Nick Payne soon after but narrowly missing the top 100 as he finished in 101st in a time of 4:46:30. Caroline Davis was next back in Harby in 5;00:37. The final two runners both agreed that the final 5 miles were the toughest as the thick mud that greeted runners for the final stretch stuck to their shoes making them feel like lead weights. They did both do brilliantly though with Claudette Joint in 5:07:12 and Penny Hodges in 5:13:21.
The race was won by Stephen Shanks whom repeated his win from last year but with very little prizes on offer the event is all about just getting a bit muddy and enjoying the treats on route. Paul Durham summed it up by saying ‘Great run...why would you do a road race when you can have food...sunshine....food.....have a laugh...food....mud and more food’.


A total of 16 runners from Grantham Running Club took part in the Stamford Striders St Valentine’s 30K on Sunday 11th February. The undulating road race, which equates to 18.6 miles, is the second of a trio of races regularly used by local runners preparing for a spring marathon. The course starts at Stamford Welland Academy & makes its way through Little Casterton before the runners embark on a loop taking in Great Casterton, Holywell, Careby, and Aunby & Tolethorpe. The route then goes back through Little Casterton before the finish at the academy. Conditions on the day were very windy with gusts reaching over 40 mph making an already challenging race a whole lot tougher.
The 30k is seen as fair indicator of where the runners are with their marathon training and most runners begin the race with a fair deal of accumulated fatigue already in their legs. It is generally reckoned that a sub 2 hour run here will see you go sub three at London and a sub 2:30 could easily see you going below three and a half at the full distance is the remained of your training goes well. Three of the senior men had a tussle for bragging rights and pushed each other to some great times. First to finish for GRC was Joe Clarke in a personal best time of 2:08:58 - knocking a huge 21 minutes off his previous attempt at the distance back in 2014. Matt Kidd crossed the line 22 seconds later in his debut race in the green and black of GRC and his first attempt at the distance. He clocked an impressive 2:09:20 narrowly beating Matthew Williamson who was 7 seconds behind also setting a new PB of 2:09:27 - bettering his 2017 result by over 7 minutes. The fourth finisher and first GRC veteran in this close group of runners was Andrew Pask. He was another one who set a new PB of 2:10:21 - over 3 minutes quicker than his previous best.
The next two runners provided a thrilling finish with Gav Meadows chasing down Dean Riggall for the last 2 miles and narrowly failing to beat him to the line. Dean continued the string of impressive GRC PB’s in less than ideal conditions with a time of 2:12:58. Gav was 28 seconds outside his fastest clocking 2:13:04. Holly Durham was next with yet another PB of 2:18:10. She also finished an impressive 3rd in the Female Veteran 35 category. A few minutes later Sam Clark - another GRC debutant. He finished in a solid time of 2:22:44 in his first attempt at the distance.
Catherine Payne and Robert McArdle both recorded impressive age grade performances - they were the only two GRC runners on the day to break the 70% barrier. Catherine finished in 2:23:15 with an age grade score of 77.86% just a fraction outside her club record for this distance. She also placed 2nd in the Female Veteran 50 category. Robert was seconds behind clocking 2:23:37 giving him an age grade score of 72.62%. He placed 5th in the Male Veteran 55 category.
Next back was Mark Wilson, Mark was suffering from a virus which had interrupted his training all year but decided to give it a go regardless, on a particularly steep hill at 9k he knew that the confident start was unsustainable and was faced with the decision of walking back to the start or continuing and risking a setback. He went for the former and was pleased to get in what was for him a good long training run and finish in 2:29:52. He was closely followed by the other invalid of the day, Tony Johnson delighted to finish over half an hour down on his best in his comeback race from serious illness, Tony started like his old self and powered his way to 24k where his legs ran out of steam and forced him to walk until some energy returned and allowed him to finish in just over the 2½ hour another.
Although Mark Hillson was down on his 2017 time he was relaxed about this as the timing of this year’s marathon means he is three weeks less far into his training and is confident he is on course for a shot at a marathon PB. It was a tough race for Nev in which he was unable to match his 2016 time but again was pleased to get the miles into his legs. Caroline Davis was one of the few runners to include a parkrun that weekend as she comfortably came home inside three hours just in front of Liam Vincent. The final PB of the day was from Yvonne Buckley who despite the wind was able to better her previous mark by a few seconds
Given the windy conditions, it was a good day at the office for GRC with some hard earned PB’s and impressive performances all round. Attentions now turn to the Ashby 20 and various other races that runners have chosen as they look to complete the longest runs of their marathon training block.