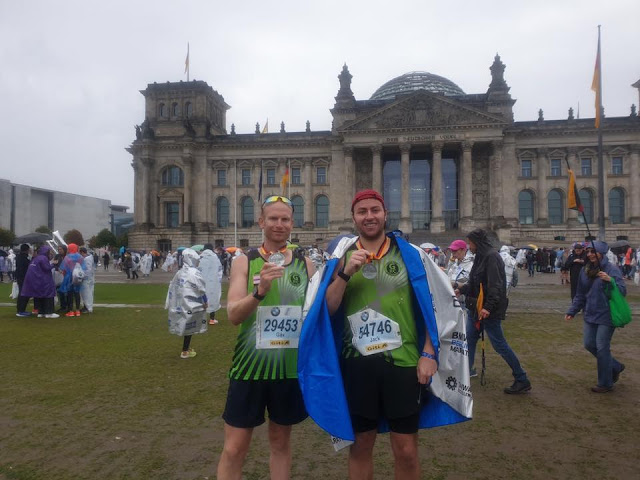 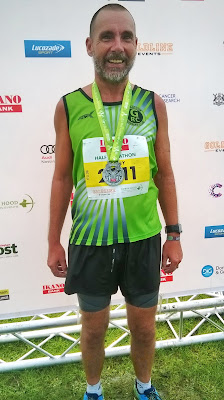 Nine members of Grantham Running Club took part in the Robin Hood Half Marathon on Sunday 29th September. The race, beginning and ending on Victoria Embankment in Nottingham, is one of the largest races in the region with over 6000 finishers.

The race marked twenty years since GRC member Tony Johnson ran his first ever race at the 1999 Robin Hood Half Marathon. The course has changed many times in the intervening years and the current route is probably the most challenging in Tony's opinion with a number of testing climbs, the most testing coming in the opening half of the race as runners pass Nottingham Castle at two miles and run through Wollaton Park at six miles. Very wet weather in the build up to the race and on race day itself made the race village soggy and puddle ridden. The finish in particular was a challenge with some runners likening it to a muddy cross country course.
First home for GRC was Piers Pye-Watson (1:28:33) who ran well to break the ninety minute barrier considering his training has been limited over the course of the year and has raced just once at the Stathern 10K in June. Next home was Tony Johnson who, since that first race back in 1999, has gone on to race a staggering 266 further half marathons! Half marathon number 268 saw another solid performance from Tony, who clocked 1:32:34.
Ian McBain enjoyed the atmosphere along the race course despite the damp conditions, clocking a season’s best 1:39:54. A fine 1:48:12 from Michelle Parczuk saw her take 25 seconds off her half marathon personal best set earlier in the month at the Newton’s Fraction Half Marathon. She was thankful for the shower of rain ten miles into her race that cooled her down and echoed Ian’s enjoyment of the good atmosphere on the course that was bolstered by good crowds, a live choir performing en route and a ‘Purple Party’ at eleven miles.
Having battled injury in recent months Clive was well down on his best but did well considering to finish in 1:59:26 - lacking race fitness but relieved that he was free from pain.  Behind Clive, Hazel Dunthorne ran 2:09:11, her legs ‘dead’ from mile eight onwards and lamenting the fact she had no idea Nottingham was so hilly! Steven Green closely followed Hazel in 2:09:49, while Paula Ebbins completed her first half marathon in 2:45:38 with the support of Emma Weighill, who officially finished just a second slower.
The race was won by Anthony Woodward of Notts AC in 1:12:19 with club mate Samantha Harrison sixth overall and winner of the women’s race in 1:14:39.
Posted by GRC at 29.9.19 No comments: 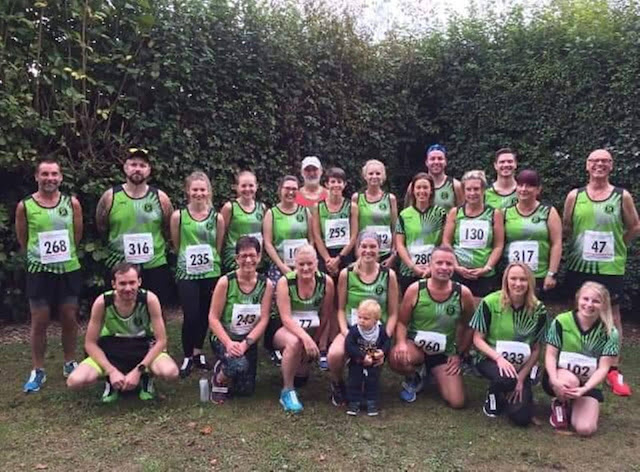 An impressive twenty five members of Grantham Running Club took part in the West Pinchbeck 10K on Sunday 22nd September, a race that wasn’t part of the club’s Grand Prix Series but has thrust itself into future consideration given the huge jump in popularity for the race held in the heart of the Lincolnshire fens near Spalding.
The near pancake flat course run almost entirely along arrow straight fen roads would be a near perfect course for fast times were it not for the near ever-present winds that afflict the area. Thankfully for the 2019 edition of the race conditions were fairly kind, with overcast skies and barely any wind.
First home for GRC was Joaquim Jeronimo, who made a late decision to enter the race after a short period of running abstinence and was rewarded with a fine ninth place finish in 38:13. Tony Johnson followed in fifteenth place and second in his age category with 40:19. One place behind Tony was Sam Jepson-Rivers who, with 40:42, backed up his triumvirate of August personal bests with an 85 second improvement on his month old 10K PB.
Sam’s wife Naomi was the first GRC woman to finish, breaking the 50 minute barrier by one second with 49:59 and in so doing smashing her old PB, set in May, by over two and a half minutes. Heather Welbourne ran well to finish under the hour in her first recorded 10K performance, clocking 58:47 and was followed closely by Alison Clark who broke her month old 10K PB by 58 seconds with 58:52.
Four other GRC runners set personal bests at West Pinchbeck. Cameron Hoggan bettered his month old 10K PB by two seconds shy of two minutes with 45:12; Dale Towning (54:00) eclipsed his two month old PB by 40 seconds; Carole Pigott (59:04) improved her June 10K PB by 24 seconds; and Sara Pask improved too on her June 10K PB by 44 seconds with 01:01:15.
Rachel Jefferson made her race debut at West Pinchbeck, crossing the finish line in 1:01:11. Emma Duncan was another race debutante, finishing in 1:03:57, as was Lisa Williams who finished not far behind in 1:04:48.
Nick Rossington (44:21) and Paul Jepson (49:55) both finished third in their respective age categories.
Wendy Smith (1:21:26), Simon Smith (1:21:28), and Rachael Bloomer (1:21:36) appeared on the provisional results but do not appear in the final published results.
The race was won by Aaron Scott of Helpston Harriers AC in 32:37 with Charlie Nurse of Wigston Phoenix RC the winning woman in 38:30. There were 278 finishers.
GRC Results: 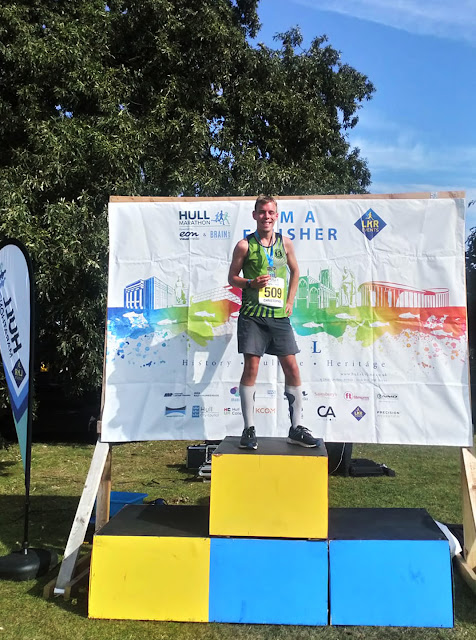 Chris Limmer was the sole Grantham Running Club representative at the Hull Marathon held on Sunday 22nd September. Taking place on a brand new route, the marathon started on the iconic Humber Bridge. After running the length of it and back, the course sent the athletes on a twisty route which featured a loop of the city centre and some of the more well known landmarks before finishing with a loop of East Park. Although conditions were near perfect for running at the start with a cooling breeze, the temperatures quickly climbed during the second half of the race into the low twenties Celsius, which added an additional challenge.

Chris, who was on a fine run of form after his third place at the Newton’s Fraction Half Marathon a fortnight prior, was hoping he could better his personal best – 2:50:12 set at the 2017 London Marathon - but wanted to enjoy too the challenge of running his first and likely only road marathon of 2019.
After setting off at a comfortable pace and despite a number of 180 degree turns Chris was able to reach the halfway mark in 1:24:54. He was able to maintain 6:30 paced miles through the twists and turns of Hull Marina. There were, however, an increasing number of lonelier sections where the lack of marshals and course markings threatened to derail Chris and the other runners as the field became more spread out. Having climbed from around twentieth position at halfway to just outside the top 10 with five miles to run, Chris continued to run strongly but opted to slow the pace slightly to try and avoid any navigational errors on a course that was becoming very difficult to follow.
Entering East Park with two miles to go Chris had climbed up to seventh place having picked off a few more runners who were slowing in the late stages of the race under the increasingly warm morning sun. Disaster was narrowly averted in the final mile where no clear directional signage saw Chris nearly made a crucial wrong turn (which, it transpires, a number of runners ahead had also made). Thankfully a local runner just behind Chris helped guide him in the right direction with Chris crossing the finish line seventh in a very respectable 2:52:00.

Pleased to have clocked such a time while running a mostly conservative race, Chris rewarded himself with a well deserved iced coffee once he had collected his finishers’ medal! Chris’ attentions are now focused on the upcoming cross country season before training commences for another stab at his marathon PB at Manchester next April.

Rutland Autumn Marathon and Half Marathon

Almost one thousand runners descended on Rutland Water to take part in a series of races along the footpaths at Rutland Waters. A heavy downpour just before the start may have made the landscape even more picturesque but it flooded many of the paths and exacerbated the crowding as the runners on this switchback course dodged not only each other but the dog walkers and cyclists who were also using the park. Two of Grantham Running Club’s members opted for the full marathon distance with experienced marathon expert Adam Wasiolka first home in 4:28:55 with Rachel Varela finishing in 5:04:09.

There were six of GRC’s runners in the half with Russel Love being first home in 1:34:51 a couple of minutes of adrift of where he would have been without such a heavy schedule on the bike in the build-up. Next in was Stuart Reader in 1:46:03 with the run of the day as he ran this multi terrain course faster than his recent half marathon which was on road. Robert McArdle was third home for the club in 1:51:35.
Chris Bibby was on course for a PB at half was but was unable to sustain the pace over the hilly last four miles but was pleased to finish in 1:54:24. Katie Bland taking part in the second of her four marathons in two months completed the course in a very respectable 2:01:4. The final athlete back was Rebecca Angel in 2:37:59, very close to her best timewise but when the conditions on the day were taken into account another outstanding performance.
Posted by GRC at 22.9.19 No comments: