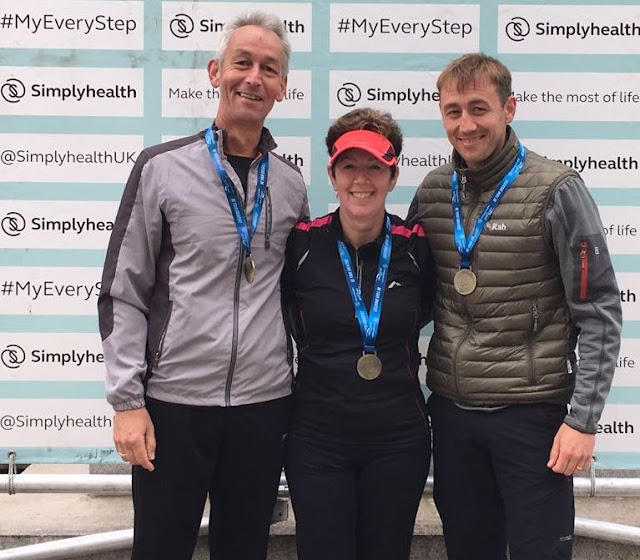 Grantham Running Club's Stuart Sinclair with parents Margaret and Graham returned to their home city to compete in the second Great Aberdeen Run, a half marathon staged within the cities granite heart. Despite the wet forecast, runners and spectators only had to deal with a cool north-westerly breeze. This gently aided runners on the leg north towards the old Gordon Highlanders barracks, around the University of Aberdeen  and the historic cobbled streets of Old Aberdeen. Heading south back along the beach esplanade proved more challenging with a head wind but was short lived as runners headed off the beach towards Pittodrie Stadium, home to Aberdeen FC and where Sir Alex Ferguson first tasted European success. From there runners head along a winding course back to the city centre, taking in the stunning sites such as the Marishal College, the second largest granite building in the world. They then continue up hill to the Queen Victoria monument before running down Union Street, Aberdeen’s mile long high street to finish to rapturous cheers and applause.  All three runners set season’s best times, Stuart Sinclair 1:34:35, Graham Sinclair 2:23:20 and Margaret Sinclair 2:35:37.
Posted by GRC at 26.8.18 No comments: 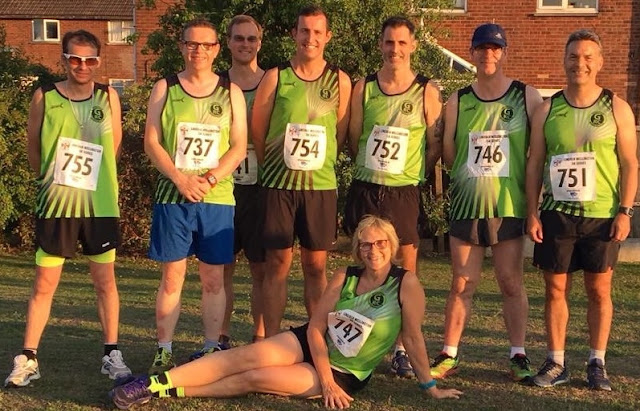 On Tuesday 21st August, 8 Grantham Running Club members travelled to Lincoln to take part in the 4th and final round of the Lincoln Wellington 5km series of 2018. Being a flat and fast course, the opportunity to achieve personal bests was there for the taking, and the GRC athletes didn't disappoint.

First home for GRC was Richard Payne in 31st place with an excellent PB time of 18:22. In a game of cat and mouse with the ever improving Joaquim Jeronimo, the GRC runners maintained a tremendous pace with Richard eventually nudging ahead whilst helping Joaquim to a PB of 18:30. Peter Bonner, completing his third race in the four race Lincoln Wellington 2018 series, finished with a strong 19:27.

Andy Atter was another to secure a 5k PB, narrowly missing out on breaking the 20 minute mark with 20:05. With progress during the summer hampered through injuries, Andy is now well and truly back on track with his fitness to compete in the Autumn half marathons - the first being this weekend’s Newton’s Fraction event in Grantham.

Nick Rossington was next home in 20:43, nearly a minute slower than his PB set on the same course 2 years ago. Craig Drury was slightly down on his best time over the distance but still managed a creditable 22:40 and Richard Hall managed a seasons best of 24:01. Dona Hall was the sole female member from the club and was another to set a PB with 30:33.
Posted by GRC at 21.8.18 No comments: 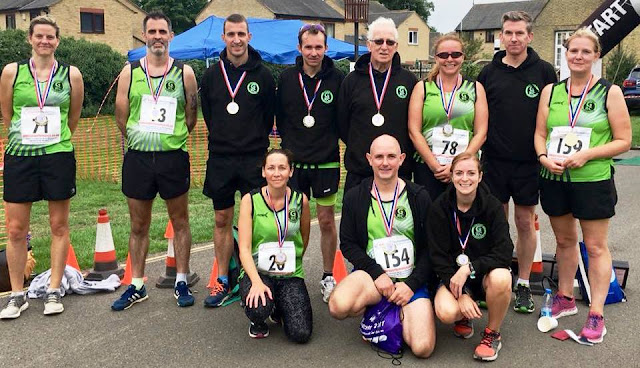 On Sunday 19th September 12 Grantham Running Club members made their way down to Peterborough to take part in the Thorney 5 which is held at Bedford Hall each year and organised by Thorney Running Club. This 5 mile road race covers the length of the village and being fast and flat had potential for personal bests for many. Thankfully the weather was somewhat cooler than previous weeks though there was a strong cross wind on the more exposed parts of the course, which being an out and back race, meant that it had to be dealt with twice. This made the mid-section of the race especially tough going.

First back for GRC was Matthew Atter, in his first 5 mile race, in 15th position overall and a time of 30:46. Richard Payne achieved a new PB by 7 seconds with his time of 31:37 and 19th place. Dean Riggall won his age category (MV40) with his time of 32:02 so came home with a trophy (which apparently wasn’t trophy-like enough according to his son!) and 23rd place overall.

Joaquim Jeronimo battled with a stitch after setting off fast which caused him to walk for a spell but still fought back to finish in 25th place and a time of 32:09. Robert McArdle came in next in 70th position with a time of 36:30. Russell Maksymiw was next back with a time of 37:24 and 79th place.

Suzanne Britz was first of the GRC women to finish with a time of 42:27 and 128th place. This was especially impressive as she had just had 3 weeks of holiday indulgence so found it more challenging than expected. Coming 4th in her age category was an added bonus. Next was Nichola Webster who set off fast and achieved a time of 43:20 and 137th place.

Sylv Hull arrived in a time of 44:53 and 153rd place in her second ever race.
Kathleen Gray achieved a time of 46:05 and 162nd place. Brendon Buckley was next and was very pleased to achieve a PB for 5 miles, beating his previous time, set at Bassingham 3 years ago, by almost 4 minutes. He came in at 47:41 and 170th place.

Kate Marshall, who reported that she was “broken” by the end of the race, having run a hard parkrun the previous morning, was happy with a time of 48:38 and 178th position.

The race was notably well organised, with great support from the locals and a splendid array of cake on offer at the end as well as a pretty weighty medal.  Definitely one for the diary next year.
Posted by GRC at 19.8.18 No comments:

The Barney Memorial 5k is the season’s final 5k race dedicated to the late Mike Barney. As well as being a stand along race it also incorporates the public prize giving for the Peterborough Summer series of 5k races and GRC’s Rob Howbrook was one of the big winners taking first prize in his age group after being runner up in 2017. There were however three of GRC’s runners competing on the night. First home for our local club was Holly Durham in 20:52 her fastest time in this year’s series and just 13 seconds shy of her all-time best set on a much faster track.  Next home was older sister Penny Hodges running her first ever 5k race and finishing in a pleasing 22:03 considering the poor start she was able to get due to the crowding on the first couple of 90 degree bends. She was please to bag a UKA ranking outside the top 200 as joint 202nd  in the FV40 category. Completing the line-up for GRC was Robert McArdl  in 23:14.
e