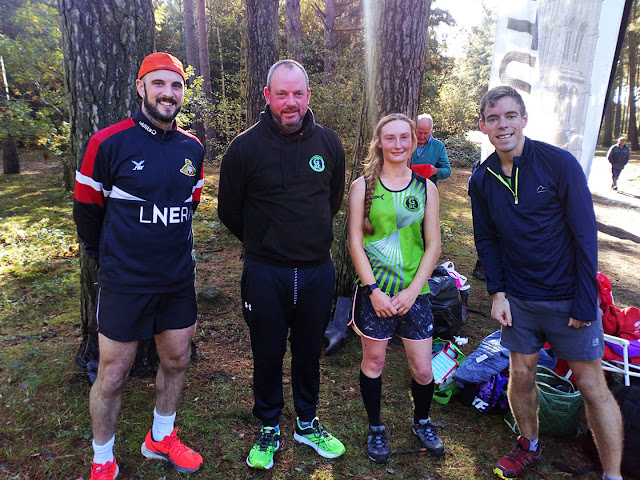 Just a week after the opening race, the second Lincolnshire Cross Country League Race of 2019 took place on Sunday 27th October 2019 at Ostler’s Plantation, near Woodhall Spa.
On a fine autumnal morning, a largely flat and surprisingly dry 8649 meter long course led to some fast times being produced over the loose stony trails. Chris Limmer was first in for the three strong Grantham Running Club’s men’s contingency. Having set off within sight of the eventual winner Jordan Carlisle from Cleethorpes he soon settled into a pack of runners about 20 seconds back as the race began the second of three laps. Positions changed a few times over the remaining laps, with eventually Chris finishing fourth (First Senior Male) in 32:22 - his highest ever finishing position in a cross country race.
Not far behind was Grant Davies who battled admirably despite his cross country spikes not being the best footwear for the loose gravel. Finishing just over a minute behind Chris in tenth (Third Senior Male) he was fairly happy with his performance. Finally for GRC was experienced cross country campaigner Chris Toon who also completed his third cross country race in as many weeks, crossing the finish line fiftieth in a time of 42:56. There were 66 finishers in the men’s U20/Senior/Veterans race.
The only female representative from GRC was Joss Smith who, despite limited training over the summer months, ran a really strong consistently paced race to finish fifth (third Senior Woman) in the 5766 meter long women’s U20/Senior/Veterans race. There were 28 finishers, with Katie Ball of Boston Triathlon Club the overall winner.
Posted by GRC at 27.10.19 No comments: 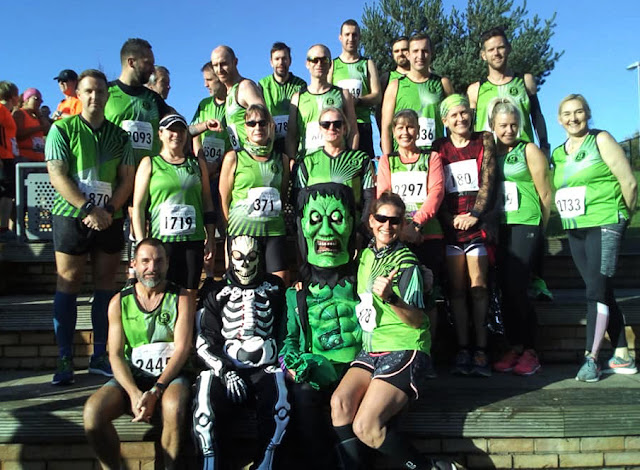 Grantham Running Club sent a bumper team of 29 runners to the 38th Worksop Halloween Half Marathon held on Sunday 27st October. Bolstered by GRC members who entered the race having been left disappointed by the start line cancellation of the Great Eastern Half in Peterborough two weeks earlier, the already popular race saw a record turnout for the Grantham club who had made it a round of their Grand Prix Series. In stark contrast to the Peterborough race, the Halloween themed half marathon once again took place in near perfect autumnal conditions.
Starting at Outwood Academy Portland, the race has one of the toughest starts of any with the first mile up to the top of Sparken Hill before rolling to Clumber Park and continuing on a constantly undulating course that culminates with a swift descent back down Sparken Hill to the finish.
Matthew Williamson led the green army for the opening miles and was the first GRC runner to encounter the road being flooded at the four mile point courtesy of recent heavy rain causing the River Poulter to burst its banks. This left runners with little option but to run through the ankle-deep water for around 30 meters.
Undeterred, the green vests pushed on when a confident Joe Clarke took the race on as if the first five miles were just a warm-up. Pushing on through Clumber Park, Clarke was gaining speed mile after mile, finishing with a downhill blast of pace to grab a PB by 29 seconds with 1:25:26 - a fine achievement on a course not normally associated with Personal Best times.
Next up was promising young new club member Barney Stretton, who was making his road race debut. Prior to the event he was encouraged by club mates to consider adjusting his original target time of beating the 1:45 his Dad had run over the course in 2018. Running free of the pressures of wearing a GPS watch and perhaps taking advantage of some local knowledge of the course having grown up in Worksop, Barney ran a perfect negative split to clock an outstanding 1:27:36. There was double cause for celebration for the Strettons with dad Barny, who has also recently joined the club, coming home with a new PB of 1:42:44.
Veteran Catherine Payne was first home for the GRC ladies, winning the FV50 category with a season’s best time of 1:38:09, placing her seventeenth woman overall and earning a age group ranking of 140th in the country over the distance. Next across the line for the ladies was the ever-reliable Caroline Davies with 1:47:59 close to her best on a hilly and testing course.
Additionally there were personal bests for Sam Clarke, who established a much more representative half marathon personal best time of 1:33:03 having previously run an injury affected 1:50:41 at the 2018 Newton’s Fraction Half Marathon, and Vicki Geeson, whose 2:32:51 saw a twelve minute improvement on her half marathon debut at last year's edition of the race. 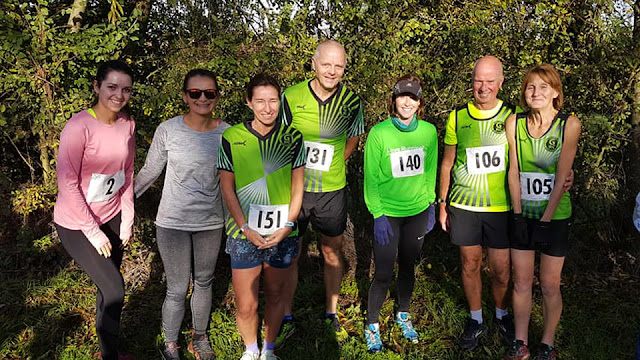 Seven members of Grantham Running Club took part in the Harby Clockback 10K on Sunday 27th October. The low key local off-road race was made more all the more challenging by the volume of rainfall experienced in recent weeks, although the race itself was run on a fine, sunny autumnal morning.

The race marked a most welcome return for the club’s outstanding runner of 2018 Julie Braker, making her first race appearance of 2019 having suffered a very serious leg injury back in March. Running with her husband Robert, they finished together in 112th and 113th positions respectively in 75:03.

Thirteen members of Grantham Running Club made the 90 minute journey north on Sunday 27th October to take part in the 34th edition of the Leeds Abbey Dash 10K, run in aid of Age UK and a round of the club’s Grand Prix Series.

Sunday dawned bright and fresh with scant breeze which, thankfully, was not as strong as forecast. Indeed aside from some light drizzle at the start, conditions were nearly perfect for racing. Starting at 9:30am meant early starts for the ‘Green Army’, but one that many felt was justified given the slick organisation, strong crowd support and the prospect of running in what turned out to be arguably the most stacked with talent and achievement UK road race in living memory, with 29 men breaking 30 minutes, 26 women breaking 35 minutes, and a quite astonishing 191 of the first 250 finishers setting new personal bests.

2019 saw a tweak of the Abbey Dash course with organisers claiming it to be even quicker due the removal of an uninspiring section through a trading estate present since 2013. The race was now as close as it has been in recent years to its original incarnation in the 1980s with the start returning to outside the famous Leeds Town Hall where runners would finish 10km later having run a simple out-and-back course along the A65 to another famous Yorkshire landmark - the historic Kirkstall Abbey. Somewhat surprisingly given the amazing times run year after year at the race, the course is not entirely flat, with a gently incline for most of the run out to the Abbey that yields a fast mostly slightly downhill second half of the race, aided in 2019 with a tailwind as  runners headed back to the finish.
The race had been set to be an exciting Coe vs Ovett vs Cram style GRC showdown between the clubs’ quickest runners Jonny Palmer, Ian Williams, and Matthew Kingston-Lee. Alas work commitments forced Ian to miss the race and a heavy cold forced Matthew to reluctantly not take his place on the start line. Ultra-runner Jonny, who himself had fought a cold in the week before the race, ran his first 10K since 2016 and his first in the green vest of Grantham Running Club having recently become a first claim member, wasn’t overly optimistic about his chances but nonetheless ran a superb 33:28, which broke Matthew’s month old 10K club record by thirteen seconds and improved his 10K PB by 102 seconds. Such is the quality of the field at Leeds, this time netted Jonny a finishing position of just 185th!
In 601st (!) place and next to finish for GRC was Sam Jepson-Rivers. Sticking to the plan of a conservative opening half, he ran with club mate Sarah Chynoweth to 5K before putting the hammer down for the run back to the finish. To his surprise and delight Sam, in clocking 39:26, not only achieved his 2019 ambition of breaking the 40 minute barrier but also sliced 76 seconds off his previous personal best.  Having targeted a sub-39 minute performance, Peter Bonner left a bit disappointed with his result at a race that brought about great success for him last year. Nevertheless he still managed to clock his second fastest ever 10K time with 39:33.
The aforementioned Sarah Chynoweth was the first GRC lady home. Like her partner Jonny, she has been focusing on longer distance training and racing over the summer but showed that this can yield great performances over shorter distances. The club’s 5K record holder ran a well judged evenly paced race to finish 89th in the women’s race. Elated with her time of 39:50, she joined a very exclusive sub-40 club, moving to #2 all time on the GRC 10K rankings behind Nicola Jefferson, who ran 39:30 at the Summer Solstice in 2015.
Brothers Jack and Sam Dodwell were one of the hundreds who enjoyed the PB streak throughout the field with each taking sizeable chunks from their previous bests. Jack, having seemingly recovered from his efforts at the Berlin Marathon, finished in 42:21, bettering his previous best by 75 seconds. Sam continued his meteoric improvement over the course of 2019 - 43:15 further improved his PB by 38 seconds set at the Summer Solstice and marked a seven minute improvement since his opening PB gambit at Oundle in January.

Second home for the ladies a freshly invigorated Penny Hodges was clearly delighted to run 44:11 - her fastest 10K since 2015 and a comfortable silver age grade securing 71.39%. Third GRC female home Sylv Hull defied all runners logic by ‘warming up’ the day before with a twelve mile jog of the Newton's Fraction course. Apparently discovering a new magic formula, she defied logic and her own disbelief to clock an impressive 54:52, over two minutes faster than her previous 10K best. Behind Sylv, Tracey Gell ran a superb race to better her previous best by over eighty seconds with 1:02:20, in so doing bringing the one hour barrier a serious target for future races.
Also representing GRC in Leeds, Stuart Baty clocked his third fastest ever 10K with 48:53; Sarah High was a very respectable thirteenth in her age category crossing the finish line in 52:05; Suzanne Hardy enjoyed her second fastest 10K to date with 1:01:24; and Louise Kennedy, who clocked 1:00:58, thoroughly enjoyed her time on the city streets and remarked at how positive the race atmosphere was, vowing to return next year.

The race was won by Omar Ahmed of Birchfield Harriers in a new event record 28:38. Charlotte Arter of Cardiff was the winner of the winner’s race - 31:34 was also an event record and the fourth fastest ever legal road 10K time by a British woman. There were 6738 finishers.
Posted by GRC at 27.10.19 No comments:

On a recent visit to Porto, Grantham Running Club’s Nev Chamberlain managed to secure a late entry into the inaugural Corrida de Halloween race, held on Saturday 26th October 2019.
Held in Gaia just across the river from the old city, the 7km race was held in the evening on closed roads over a hilly, mostly out and back course.

With 668 finishers Nev was pleased with his 138th place and finishing time of 38.57, which placed him fifth in his age category.