Grantham Running Club was represented by eight runners in the annual Langtoft 10K Road Race on 30th April 2017. In total there were 339 participators in this early season test. 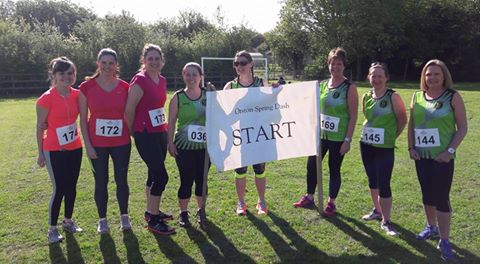 Six athletes from Grantham Running Club competed in the annual Orston Spring Dash on Sunday. The course starts and finishes at the village school who helped to organise the race with profits going to the school funds. The runners were greeted by ideal running conditions with hardly any wind and bright sunshine coupled with a very friendly and relaxed atmosphere at the start line. There was a good turnout from many different local clubs considering the opposition from bigger races for this low key event. The course was slightly long - 6.45mls by watch and the route was typical country lanes out towards Flawborough with a long, straight return through Thoroton. Mild undulation as expected with 2km of 'multi-terrain' (track) which occasionally tested the balance. In all there were, 201 runners with the only congestion was at the start when everyone politely deferred to each other as we exited the Orston primary school grounds Neil Emerson was first home in a gun time of 50:58 with the first ladies back being Nicola Cottam and Rosalind Sadler both recording a time of 59.27 closely followed by Nicola Fahy 61.27 then Vicky Honey in a time of 64.37 with CJ Walker completing the team with a time of 72.30.
Neil Emerson commented “On reflection the run a friendly, homely, honest feel to it and well worth the £10 on the day entry fee, I only read about it on the GRC Facebook page and decided to incorporate it into my Sunday run as it is only four miles from home”. The team’s enjoyable day was rounded off when they were greeted at the finishing line with tea, cakes and bling.
A special mention has to go to Hayley Staff (63:18), Julia Hallam (68:39)and Claire Fritz (72:30)of the 2017 new runners group class who completed their first ever 10K in very creditable times.

Thirteen members of Grantham Running Club blitzed the 2017 Virgin Money London Marathon, held in near ideal conditions on Sunday 23rd April. On a memorable day for all who took part, there was a new club record, a bucketful of personal bests and a truly unforgettable experience for the marathon debutantes who joined the record 39,349 finishers cheered home by the estimated 800,000 spectators lining the course from start to finish.
Club Chairman Matthew Kingston-Lee was the first GRC runner to sprint down the Mall on Sunday to finish well inside the top 400 runners. Despite suffering an injury scare on the way to the start, Matthew put on a metronomic master class of even paced running, his eight official 5k splits deviating by no more than 40 seconds (and all bar one under 19:30), culminating in a new club record of 2:41:42, bettering his old PB by a second shy of two minutes. This time secures him a prestigious Championship entry for the next two years.
“The injury issue before the start was an unwelcome distraction, but fortunately it didn’t affect me too badly in the race. I felt very comfortable for the first 20 miles, aiming to keep the pace at around six minutes per mile. I had a bad patch from 20-22 miles and had to dig very deep. With 5km to run I passed some friends cheering me on. This inspired me to go full gas and pray I didn’t hit the wall! Happily I didn’t and I was delighted to walk, albeit slowly and painfully, away with a big new PB!” commented Matthew after the race.
Next home was Chris Limmer who also ran an impressively even paced marathon to knock a minute off his old PB, describing his 2:50:12 as “an emotional marathon PB... Awesome... Just awesome!” Dean Riggall, faced with the choice of targeting an excellent 3:05 or the cherished ‘sub-3’, bravely opted for the latter. On target at halfway he suffered somewhat in the final miles but his time of 3:06:54 bettered his old PB by two and half minutes secured himself a Fast Good For Age place for the next two London Marathons.
First woman home for GRC was Holly Durham who was 350th lady in the race. With the lure of a sub 3:15 performance securing a Championship place for future London Marathons, Holly, running her second London Marathon and fourth marathon, ran a superbly consistent race to clock a new PB of 3:17:41, finishing within 10 seconds of where she realistically expected, commenting afterwards “I’d forgotten how hard marathons are!” Putting this performance in terms of parkrun, it is like running eight and a half of them in a row all under twenty three and a half minutes each.
Less than 30 seconds behind Holly finished Catherine Payne as 379th lady. Running an even paced marathon with a slight negative split, that is running the second half faster than the first, Catherine ran an exceptional new PB of 3:18:10, bettering her old best by 75 seconds. This earned her a brilliant 19th position in the VF50 age category and should rank her inside the top 25 in the country for her age over the marathon for 2017 to date. The key to this performance was even pacing with all splits being within 2 seconds per mile of her average speed.
Paul Davies, running his first London Marathon as one of the GRC club ballot winners, was, like so many, overwhelmed by the whole experience. An exuberant opening half to the race led to six miles of painful cramp to end the race, yet it yielded a 3:30:46, just over a minute outside his PB, and a promise to return faster in the future.
Penny Hodges didn’t enjoy an ideal preparation for her first London Marathon and planned to run a very conservative opening half of the race with the hope of a strong finish. This sensible tactic reaped an impressive near eight minute PB of 3:40:57, a delighted Penny has all but certainly secured a prized Good For Age spot at the London Marathon for the next two years.
Tommy Williamson, running his third London Marathon with a club place this time, also went into the race a little undertrained due to work and family commitments. He opted for the ‘fast opening half and hope for the best’ tactic, which led to a slowdown from which he was happy to finish, breaking four hours with a time of 3:55:01.
Andrew Spencer, who is training for Ironman Barcelona in October, was hoping for, rather than expecting a sub-4 hour clocking. Promising afterwards, like every year, it would be his last marathon, Andrew, rasing money for Headwat, Northants slipped outside four hours after a strong opening half to the race, but finished inside the median finish time of 4:26:33 in a highly commendable 4:05:09. This year he raised £4,000.
Four runners made their marathon debuts at London at the tougher end of the field. Being out for longer not only means it is getting hotter but there are the additional hazards like 30,000 discarded drinks bottles to trip over! Jacqueline Jacobs admitted her marathon ‘didn’t go quite to plan,’ clocking 4:50:40, but enjoyed the amazing experience of being cheered on by the fantastic crowds at Tower Bridge in particular and was pleased to have overtaken ‘Gandhi’ at mile seven and a rhino at mile 12! Blown away by the noise and emotion and finishing in 4:56:25 in a daze, Hazel Dunthorne had secured her place through the open ballot but decided use her run for a good cause and raised over £1300 for the Steps charity.

Jo Moore, raising over £560 for Cancer Research, commented afterwards on the amazing crowds that kept her going to the finish, clocking, 5:47:12.

Embodying the spirit of the London Marathon that has helped make it one of the world’s most famous sporting events, Amanda Mumby battled ‘dead legs’ in the final miles to come home in 6:14:57. Her heroic efforts meant that she raised over £2000 for the Dogs for Good charity.
After the race Club Chairman Matthew Kingston-Lee commented:“It was a fantastic day for the club and for the running community at large. I was enormously proud of all our runners and hugely grateful for the support of those who travelled down on the day to support or who followed online. All our spring marathon finishers are looking forward to a well deserved rest over the next few weeks and a group celebration this weekend!”

Blackpool Marathon and Half Marathon

Whilst all eyes were on London last weekend a trio of GRC members were in Blackpool competing in the Fylde Coast Runners race weekend which saw various distances ran but for our travellers the main focus was the marathon and half marathon. Ben Mason was first in for the club in a respectable time of 3:55:09 a little slower than hoped but with a brisk wind of the sea and warm conditions a good result never the less. Yvonne Buckley also running the marathon came home in 5 hours 35mins 43secs  having completed the first 20 miles in under 4 hours but then falling victim to injury and fatigue. Yvonne's husband Brendon opted for the half marathon and came home in 2 hours 25 mins. 44 secs 4th position in his age category’