With only Sheffield based Steel City Striders RC represented by similar numbers, forty-five members of Grantham Running Club took part in the Bassingham Bash Five Mile Road Race on Saturday August 31st. A round of the GRC GP Series, the 2019 edition of the race looked to be in doubt when previous organisers Witham Runners decided to withdraw their support in leading the organisation. Thankfully Newark based running coach Bill Taylor took control of the event with the aim of developing the original ethos of the event – to encourage the next generation of running talent to be competing against one another.


Bill, who in the past year has adopted a philanthropic approach in coaching many runners from different clubs in the region - including some from GRC - has stated that any surplus from the event will be ploughed back into projects for young athletes. While some bemoaned the lack of finishers’ ‘bling’ and a partial chip timing system which effectively meant the race was gun timed, the event served up a fast flat course with generous cash prizes on offer for a race of relatively modest numbers.
After the heatwave of 2018, conditions were relatively good for a Saturday afternoon race in late August, albeit uncomfortably warm when in the full gaze of the sun and troublesomely windy when not sheltered by roadside hedges, particularly at the finish. Moreover some finishers had to put the hammer down to avoid a heavy rain shower chasing them home! While there were no medals or souvenirs awarded to finishers, plenty were spotted enjoying the home made cakes and other refreshments being sold.
First home for GRC was Ian Williams, who finished 22nd in a high quality field, clocking 27:52 - seventeen seconds quicker than his debut five miler at Thorney earlier in the month. He was followed exactly a minute later by Chris Limmer who had a great run to break a long standing official five mile PB - also by seventeen seconds - in 28:52. Matthew Williamson, one of many making their five mile debut, was third home for the club, just outside the prestigious 30 minute barrier in 30:13 and just two seconds ahead of Joe Clarke, also taking part in his first five mile race.
First GRC female to finish was the ever impressive Catherine Payne who clocked her fastest five mile performance since 2016 with 34:14 which earned her first place in the V50 category and twelfth woman overall. A fine run from recent GRC recruit Michelle Parczuk saw her second home for the club with 37:37, with Willow Stacey smashing her previous five mile PB by over 11 minutes with a sub-40 39:24.
A few seconds slower than at Thorney, Naomi Jepson-Rivers was the fourth GRC woman to finish in 41:06. There was though a PB in the Jepson-Rivers household for husband Sam shaved five seconds off his Thorney time – 32:58 over five miles adding to the PBs he set in August over 5K and 10K. The extended family had cause for celebration too as Sam’s father Paul Jepson was delighted to better his Thorney 5 time by 21 seconds with a 39:54 PB and his brother Edward Jepson finished his first ever race in 47:27 having just completed a couch to 5K programme.
Continuing the family theme there were personal bests for two other GRC couples competing. Claire Williams joined husband Ian in bettering her Thorney 5 time by over a minute with 41:11 while Andrew and Sara Pask both bettered times set in 2016 with 32:38 and 46:59 respectively. Andrew also had his older twin sisters racing – the first time they’ve all raced together. Brothers Jack and Sam Dodwell improved on their Thorney 5 performances by 32 and 25 seconds to clock personal bests of 34:43 and 35:17 respectively.
With over half the GRC contingency making their debut over five miles, the only other new personal bests were set by: Peter Bonner, who took just under two minutes off his old best with 31:37; 35:46 for Russell Makysmiw saw his PB improve by 99 seconds; and Louise Kennedy, who at Thorney bettered her old PB by over four minutes and ran very well to knock another 75 seconds off that performance at Bassingham with 51:21.
In addition to Edward Jepson, it was the first ever race for Aaron Smith, who ran well to finish in 36:49. It was the first too for Heather Welbourne, who came home in 48:45 and Chelsea Chell, who raced for the first time in GRC colours havinggraduated from the club’s beginners’ programme, crossing the finish line in 48:38. The race was won by Aaron Scott in his JLC Racing vest with a new course record 24:32, bettering Ben Livesey’s old figures by five seconds. Lucy Crookes of Leeds City AC finished fifteen seconds ahead of Great Britain international runner Gemma Steel of Charnwood AC to win the women’s race in 27:15, breaking the old course record held by Sophie Cowper by 57 seconds. There was an event record 272 finishers. 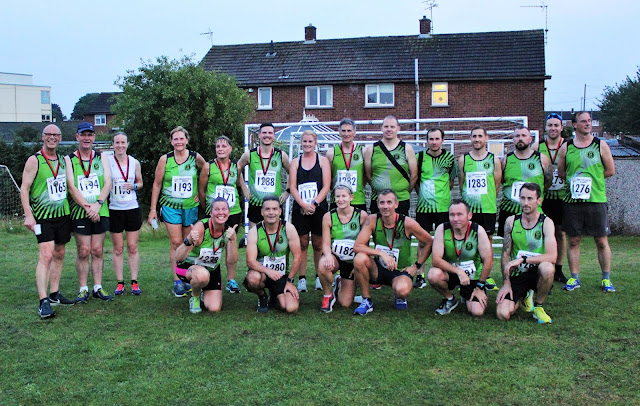 ‘Biblical’ thunderstorms following a rare August Bank Holiday heatwave failed to prevent some very fine performances from many of the Grantham Running Club members taking part in the fourth and final round of the Lincoln Wellington 5K Series and the supporting Memory Mile event, held on Tuesday 27th August.

Extra pressure was placed on the eight GRC members who chose to play their ‘Joker’ for the club’s Grand Prix Series – this being a one-off opportunity to add a scoring event from a race outside of the twenty official fixtures. The evening’s races were made all the more interesting as they took place in the midst of thunderstorms breaking over the city. Runners were seen running for cover shortly before the mile and 5K races as the rain hammered down. The races though were held in dry, albeit sultry conditions, with temperatures still in the mid to high twenties Celsius for the evening races.
First of fifteen GRC runners home for the club in the 5K race was the ever-impressive Rob Howbrook who, despite clocking his slowest 5K of the series with 19:33, did enough to win the V60 age category on the night and the V60 prize for the series. Arguably the performance of the evening came from Sam-Jepson Rivers who smashed his month old 5K PB by 42 seconds, clocking 19:38. He was paced by Joaquim Jeronimo, who finished just behind with the same time.
Claire Williams was the first ‘first claim’ GRC woman to finish in her first official 5K race, running well to clock 24:54. Julie Gilbert was next home in 26:46 with Tracy Webb following in 29:43.
Dale Towning finished his first 5K race in 26:26 and Dona Hall, running with husband Richard, bettered her 5K by 32 seconds, her time of 30:01 agonisingly close to breaking 30 minutes.
The race was won by Joe Wilkinson of Lincoln Wellington AC in 15:07 with club mate Abbie Donnelly the winning woman in 16:28.

The Memory Mile attracted nine GRC runners in a field of thirty-one. Ian Williams finished fifth in 4:56, bettering the club record, previously held by Chris Limmer, by four seconds.  Joaquim Jeronimo was next to finish; clocking 5:12 at his first attempt over the distance with Peter Bonner next home in 5:31. Jack Dodwell bettered his PB by nine seconds with 5:42. Matt Fryer, close behind in 5:44, improved on his previous best by twenty six seconds and Sam Dodwell broke six minutes in his first attempt at the distance with 5:57.

The mile was won by Philip Nind of Holme Pierrepont in 4:41 with Lucy Thornton of Lincoln Wellington AC the winning woman in 5:41.