The annual Thorney 5 mile race was back but in a Covid aware form, this is a road race covering the length of the village on roads closed to traffic and had the number of entrants reduced as well as a more staggered start. Nine athletes from Grantham Running Club took part, many of them regulars as the race returned to Bedford Hall.

During the time when there weren’t very many races on runners were able to concentrate of their training and come back with much improved performances. Yvonne Buckley’s time of 48:54 was an improvement of just over two minutes since the last time this race was run made all the more special by moving up an age category in the interim. Another big improver was Kate Marshall shaving 1:50 off her 2019 time to finish in 45:16. Making his impressive debut at the distance was Clive George in his best road race to date, His time of 38:09 was good enough to place him in the top 50 men of his age in 2021 in the UK at this distance! Another debutant at the 5 was Fraser Marshall with an on target time of 52:40.

As the race was part of the GRC Grand Prix series three athletes who had raced on Thursday night made a quick turnaround and race again albeit on slightly tired legs. This time round Peter Bonner (33:48) managed to pip Rob Howbrook (34:10) in the last half mile in a reversal of their 5k result with Chris Armstrong’s 35:56 more than enough to secure him the clubhouse lead for the trophy.

First woman home for our local club was Catherine Payne in a time of 36:25 to finish fourth lady and first veteran just over 30 seconds in front of Robert McArdle who clocked 37:03. 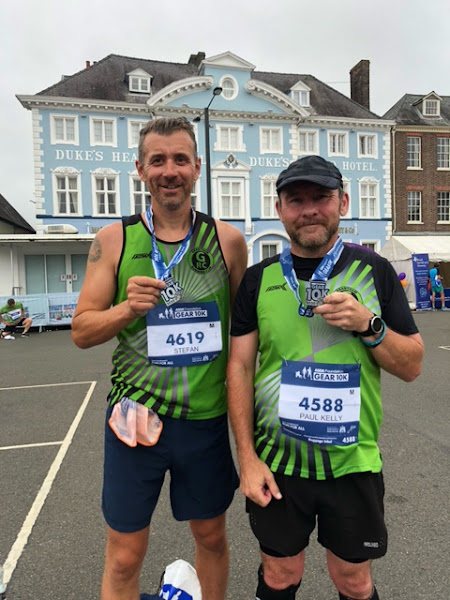 Paul Kelly and Stefan Latter ran the Gear 10k in Kings Lynn on Sunday 22nd August, this was a deferred race from 2020 due to Lockdowns. Paul had ambitions this time last year of challenging his previous Pb but with a year or more of not being in a race environment tailored his ambitions to running sub 50 minutes which he did in 48:30, giving him a seasons best.

Stefan Latter looked upon this race as a PB potential with the course being a flat route around the closed roads and parks in Kings Lynn. Stefan ran a very evenly split race knocking 10 seconds off his previous best at Sleaford 2018 finishing in a new personal best time of 42:36.

Both Paul and Stefan thought this was a great event with a fantastic crowd, and earmarked it for next year.

Racing in the same heat Dean Riggall and Sam Jepson-Rivers; Sam making his debut and Dean his first track event since he was 17.

The morning had loomed grey and overcast, however, with the commencement of the event and earlier heats rain had settled in, making the track a little slippy with standing water in places.

It at least made the racing conditions cooler.Hanging on to the pacer from the gun, Sam clicked off laps just off target pace in circa 86 seconds.

Dean also settled into his work as the laps racked up, his lap times coming in around 88 seconds.

Having taken the racers to 4k, the pacer dropped out; it was here that Sam lacking in experience let things slip with laps of 88-89 seconds – as the group he found himself had also collectively slowed. Saving his kick perhaps a little too late, he dropped a final 400m of 76 seconds to finish in 18:11.79 and finish 3rd in the heat (it proved to be no less effective as he moved from up from 5th at the start of the bell lap).

This time represented a 15 second improvement to his road 5k time for context.

Dean’s consistency and determination throughout paid dividends as he picked off runners not employing his metronomic pacing. It saw him cross the line in a fantastic: 18:22.11 and age grading in excess of 76%.

Again, for context, it showed a 19 second improvement over his best parkrun time – the only comparable distance for this long-distance specialist.

Elsewhere, GRC alumni Jonathan Palmer clocked 16:37.82 and Matthew Williamson chalking up a PB in 18:21.17 in their respective heats.

Chris Perry of Vale Royal/Liverpool Harriers ran the fastest of the meet in very credible 13:52.79.

Rebecca Murray of Bedford & County/Brunel Uni London being the fastest woman in 16:06.40.


On Thursday 19th August, 12 members of Grantham Running Club made the trip to Prestwold Hall, Leicestershire to take part in the Chase The Sun Race Series. Three races categories we available, 5k,10k and 10 mile. With both the 5k and 10k featuring in round 4 of the clubs GP series.

The evening saw near perfect running condition's for competitors, compared to Chase The Sun held earlier this year which saw runners compete against rain and wind.

In the 5k race the club had 7 members competing, all with impressive finish times. First home was the ever impressive Robert Howbrook with a return to form 20:11, scoring a whopping 80.88% age grade, the first GRC male to hit the national level marker in 2021. Closely following was 5k specialist Peter Bonner with 20:15, a seasons best for distance.

Chris Armstrong was next, also clocking a SB with 21:23 followed by Stuart Baty with 22:46, a 20s PB. Then it was Paul Davis who having returned from injury achieved a great time of 24:15. Tommy Napier was happy enough with his 25:25 in only his 2nd attempt at the distance. The inspirational Simon Hartley was the final green vest home with an outstanding 29:07, a near 3min PB after restarting running from scratch in the spring.

The 10k race drew 4 members competing and achieving impressive times. Robin Atter caught the GRC captain's eye in his debut 10k race with 41:43. Seasoned runner Gav Medows was hoping for some shoe technology magic but struggled with the multiple lap format of the course. He's certain to build on his 43:04. Caroline Davis came first in her V50 age category and was pleased with her 50:04. Then it was Julie Riggall with an outstanding time of 55:25, a bumper 3min pb, her previous best set as far back as 2018.

In the 10 mile Andrew Pask finished with a great time of 01:07:32 in his first outing over the distance for 3 years.


Grantham Running Club’s Nick Parkin and Chris Armstrong turned out for the Holme Pierrepont 10k at 5pm on Thursday 5th August. The race had a brilliant team of organisers and marshals who made everything run smoothly. The rain kept the field of runners cool on this fast flat course. Nick and Chris where both pleased with their performances. Nick achieved a personal best time of 47:11, with Chris achieving a seasons best time.