A sunny but cold Bourne Woods was the venue for round three of the Lincolnshire Runner Cross Country  League last Sunday. This woodland course is pretty much stony trails with a covering of damp leaves more suited to trail shoes than full cross country spikes. For the second time this year GRC has a full men’s team out meaning they are still on course to have it counting in the final standings with the last race in December.

First home for the club in the men’s race was Matt Williamson in 39:34 despite an 11½ mile tempo run the previous day sandwiched round the Belton parkrun. Next in was Gav Meadows (41:25) taking it easy due to a heavy training session earlier in the week with the third man to count Chris Toon (45:46) just managing to hold off GAC’s Mark Tucker in a sprint finish. He was followed by long distance specialist Andrew MacAllister (48:52) and Marc Tremain in 51:54

For the first time this year we were able to field an A and a B team in the ladies 6,000m race with seven runners taking part. First home was Catherine Payne in 30:22, her first outing in three seasons, second back was team captain Sarah High in 33:54 and completing the A team was Helen Brown (35:14) taking part in her first X/C race since 2010. This gave our team the best result of the season moving them up to fifth in the table.
Justyna Gill (38:46) led the B team followed by Belinda Baker (46:09) with Julia Hallam (49:39) just edging out Claire Fritz (49:40) for the final place. 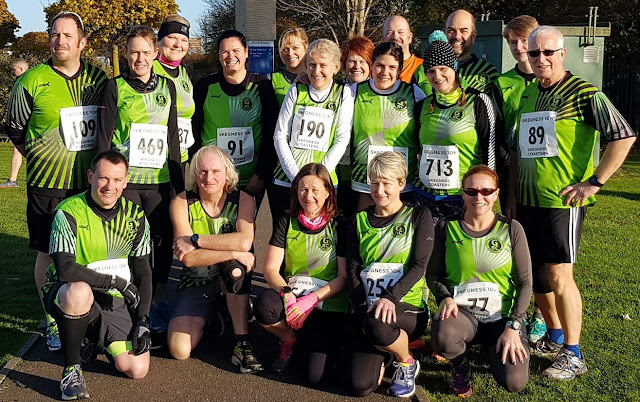 On Sunday a large contingent of twenty runners from Grantham Running Club journeyed across the county to compete in the
Skegness 10K. This race promised to be a fast and flat course. The weather was, as the motto goes, 'so bracing' - cold and dry, perfect for running. After collecting numbers, dropping off bags and taking the obligatory group photo, the runners lined up for a prompt 10am start. Although billed as the Skegness 10K, the race started in Ingoldmells and, it turned out, was wholly to be run in a caravan park. This involved a combination of loops and doubling back, making for a rather uninteresting course. This negative was more than compensated for by plenty of marshals and good support en route.

First male member of the club past the line was Peter Bonner, continuing his strong and consistent running this season by claiming his fastest time at this distance. He was followed by Paul Davis, currently nursing a knee injury and still posting an impressive time. First lady was Rachael Smith, running her fastest time in the process, with Suzanne Britz hot on her heels.
For many of the runners, the flat course fulfilled it's promise; Melanie Taylor, Emma Weighill, Amanda Mumby, Stuart Baty, Julie Gilbert and Rosalind Sadler joined Rachael and Peter in running a PB - their fastest time ever. Martin Carter and Brendon Buckley, running he
roically, ran their fastest time of the season.

All the runners got a medal and goody bag. Both the medal and the (optional) T-shirt sported the RNLI lifeboat motif. All profits from the race were donated to RNLI Skegness.

Grantham Running Club's Gordon Geach travelled to Valencia, Spain for the 37th Valencia Marathon on Sunday 19th November. The marathon route is flat and takes in a lot of the sites of Valencia, both in the new and old parts of the city. The marathon has an early start at 8.30am due to the local climate. The forecast for the day was sunny with blue skies and the temperature creeping to 20 degrees just after midday. Gordon remarked that the organisation of the race was very good from number & bag pickup to the actual event and afterwards.
He admitted his training plan was not quite up to scratch only running 6 miles twice a week. He said his plan was to try and run the marathon like a long, slow Sunday run and that worked till the half marathon point, clocking 1:50:26. But then he said he hit the wall 7 miles too early. 'The second half of the marathon was a world of pain, with my legs hating me all the way to the finish' he said.

Gordon crossed the line in a time of 4:37:40 - a little annoyed he didn't make sub 4:30:00, but glad he had finished. He also commented that the finish at the Arts and Sciences complex was really spectacular. Gordon said "Overall I enjoyed the race and will be doing it again sometime in the future - one for the list if you’ve not done it before. My next marathon is London. I need to do some proper training for it and get my time down significantly. I would hope to attempt break my personal best of 3:20:53." 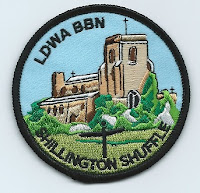 GRC's Nick Payne completed the 26 miles (26.8 actual) version of this LDWA event in 5:45:34. It is starts from Barton-le-Clay Village Hall.The route follows mainly field paths, tracks, woods and some roads through undulating countryside with good views from the hills traversed. The £10 non members entry fee included snacks at all the checkpoints and the finishers badge
Posted by GRC at 19.11.17 No comments:

Grantham Running Club couple Julie and Robert Braker took part in the Derby 10 Mile on Sunday 12th November. Starting at the Derby County stadium, the course is mostly flat. It runs along the riverbank & through the grounds of Elvaston Castle before returning to the stadium for the finish. Conditions were good for running overall with a slightly chilly wind on the day.
Julie continues to wow her clubmates with her performances and it's no exaggeration to say that she is currently among the best runners in the country within her age category. She crossed the finish line in 1:21:52 placing 1st in the Female Veteran 65 category scoring a whopping 89.82% age grading. Futhermore this result placed her 10th in the UK rankings for this category over the 10 mile distance & will no doubt improve upon the outstanding 24th UK ranking position she held across all distances in the FV65 category going into this race.

Robert's performance was also very impressive. He posted a time of 1:23:21 also securing a UK ranking. He currently sits in 137th position in the UK among competitors in the Male Veteran 65 category for performances over the 10 mile distance. He also narrowly missed out on a 70% age grading scoring 69.81% and placed 1st of all men aged over 65 in this race. No prize was awarded due to the structure of the men's categories being slightly different to the women's but this is still a remarkable achievement. 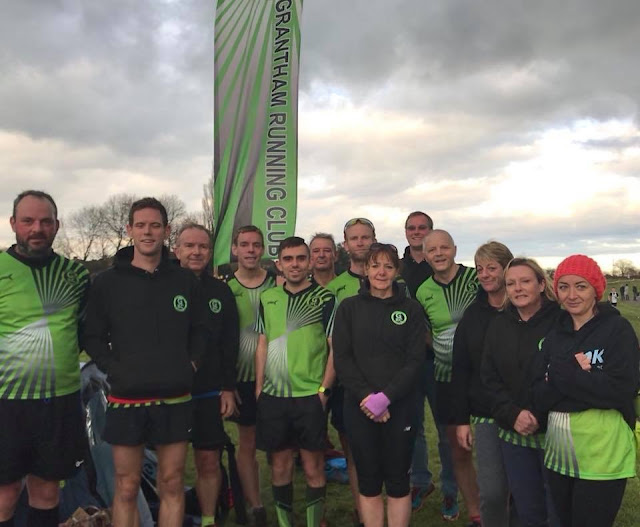 On Saturday 11th November a group of 13 runners from Grantham Running Club travelled to West Glebe Park in Corby to compete in the second fixture of the North Midlands Cross Country League. The course was an enjoyable & undulating mixed terrain affair combining sports fields with woodlands & trails. The weather was very pleasant for the autumn with mild temperatures, very little wind & even a little sun.
The club’s ladies tackled 2 laps which meant a distance of approximately 6km. Sarah High was first home in a time of 28.59 which put her first in her age group. Nicola Cottam was second for GRC in a time of 31.20 followed by Nicola Fahy and Justyna Gill who ran 33.09 and 34.09 respectively. As a result of their efforts the GRC Veteran Ladies are now in 10th place in the league.
The men had a '3 and a bit' lap course to contend with making a distance of approximately 9.5km. The first male GRC finisher was Chris Limmer in 35:44 finishing in 68th position overall. He was followed by Gav Meadows (39:14) with Matthew Williamson (39:38) hot on his heels. Another two GRC runners finishing within seconds of each other were Andrew Pask (40:38) & Peter Bonner (41:01). There were 4 more GRC finishers - Daniel Howson (45:32), Kevin Kettle (45:45), Christopher Toon (46:14) & Andrew McAllister (48:52). The GRC Veteran Men are also now sitting in 10th position in their league.
Posted by GRC at 11.11.17 No comments: