The final races in the inaugural Mallory Park Winter Race Series took place on Sunday 26th January and there was Grantham Running Club representation in the 1 mile, 5K, and 10K events that took place on the Leicestershire motor racing circuit.

In the ‘Fast Mile’ race Joaquim Jeronimo sped to the finish line in
5:24 to claim fifth position overall, twelve seconds ahead of seventh placed Peter Bonner. Clark Roberts of Coventry Godiva Harriers was the winner in 4:44 with Hannah Oldroyd of Ribble Valley Harriers the winning woman in 5:18.

Both GRC runners were back competing in the 5K. Joaquim finished eleventh overall in 18:43 with Peter Bonner finishing fifteenth in 20:06. Although not credited at the time, Joaquim was retrospectively awarded the 5K Series prize for his efforts in the three events. Behind Peter, Stuart Baty ran well to clock 24:03 – just seven seconds outside his 2019 best in his first 5K race outing of the year – and Simon Hartley ran a similarly strong race to clock 32:51, twenty three seconds outside his 5K PB set last June. The 5K race was won by Jonathan Peters of Race Rapid in 16:10 with Hannah Oldroyd backing up her mile victory by winning the 5K too in 18:06.

‘Flash’ opted not to run the 10K but there was no stopping Peter Bonner who capped a good morning’s work with a 43:39 clocking in the 10K race which saw him finish twentieth overall. Robert Braker improved on his Oundle 10K performance by over two minutes with 54:02. His wife Julie Braker was a few seconds down on her Oundle time with 55:36. Both won their respective age categories by dint of being the only entrants! 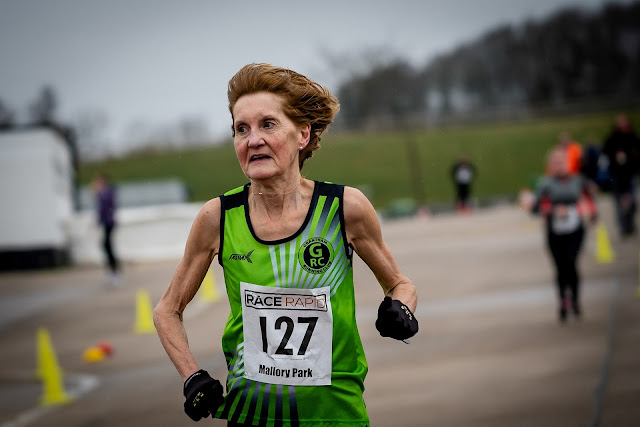 
Twelve members of Grantham Running Club took part in the thirty first running of the Folksworth 15 mile road race on Sunday 19th January.
The Yaxley Runners and Joggers hosted event is one many use as an early training race in preparation for a spring marathon and has, in recent years, earned something of a reputation as a magnet for very cold, icy, and sometimes snowy weather. Although conditions were not as treacherous as many of the roads surrounding Grantham on the morning of the race, there were small pockets on the undulating two lap course that were very icy and saw some runners opt to take a cautious approach rather than risk injury.
First home for GRC was Jonathan Palmer who ran the opening lap at a steady pace then upped the tempo on the second lap to see him running at his planned pace for the upcoming London Marathon in April. Finishing several minutes faster than in 2019, Jonny finished a fine eleventh, his time of 1:28:14 seven seconds quicker than the previous club record held by Matthew Kingston-Lee when he ran the same race in 2017.Behind Jonny, Tony Johnson was next to finish for the club, opting to run within himself given the conditions yet still
finishing fourth V50 runner in 1:45:40. He was immediately followed nine seconds later by Matthew Williamson (1:45:49) who was pleased to secure a two minute PB, despite not being at 100% full fitness.

Catherine Payne was next to finish with a fine 1:51:48 just half a minute outside her best on the course. Finishing eleventh female overall and only three seconds behind the first senior woman, Catherine was second in the V50 category behind the impressive Philippa Taylor of Helpston Harriers, who ran 1:40:18. Just over half a minute later Holly Durham finished twelfth female overall and fourth in her age category with 1:52:21. Robert McArdle claimed the same position in the V60 category breaking two hours with 1:58:37.
In her debut over the distance Michelle Parczuk clocked 2:01:21, four minutes ahead of Caroline Davis (2:05:48). Ben Mason (2:08:27) and Warren Stark (2:08:45) finished in close company, as did Neil Emerson (2:16:35) who came home thirty five seconds ahead of Sarah High (2:17:10).

The race was won by Aaron Scott of Helpston Harriers in a new course record 1:17:55 with V55 runner Gill Fullen of Bedford Harriers the impressive winner of the women’s race, clocking the same gun time (1:38:22) as second placed Zoe Smith of Rutland Running and Triathlon Club. There were 462 finishers.


Photos by kind permission of PJ Running Photos
Posted by GRC at 19.1.20 No comments:

Fourteen members of Grantham Running Club took part in the second Oundle 10K on Sunday 12th January. Once again the race kicked off the club’s Grand Prix Series and gave runners the opportunity to blow off some cobwebs after the Christmas break. There was also a supporting 5K race, which no members of GRC opted to take part in.

Although the blustery conditions were hardly ideal, those who ran the race twelve months earlier considered the wind a mere breeze compared to the gales blowing in nearly exactly the same south westerly direction they faced in 2019. Many runners though did have the misfortune of being struck by a rogue rain shower that hit the course in the midst of some pleasantly sunny conditions.
First home for GRC and second for the second year running was Matthew Kingston-Lee. As in 2019 he made his way through the field to sit third at the opening lap when he passed the same second placed runner he overtook at exactly the same point twelve months prior. Literally minutes behind the impressive V50 winner John Herbert of Helpston Harriers, who ran a course record 33:24, Matthew was pleased to finish a somewhat lonely second in 35:31 – over a minute faster than he ran in 2019.
Behind Matthew Joaquim Jeronimo was also pleased to kick off the year in a positive manner, bettering his time at the 2019 edition by nearly two minutes with 38:39 and in eighth overall and seventh male given that women’s race winner Hannah Oldroyd of Ribble Valley Harriers finished fourth overall in 37:41. Joe Diggins showed he had made a full recovery from a calf injury suffered at the back end of 2019 to finish fifteenth and under a minute outside his 10K PB with 41:08. Mark Rice, who joined the club in October having taken up running again after some years away from the sport, finished his first race with GRC in 51:07. Fraser Marshall ran his first race in GRC green having formally joined the club at the start of the year, clocking 54:58.

Julie Braker was the first of four GRC women to finish, claiming first place in the V70 age category coming home in 55:08 and ahead of husband Robert, who ran 56:44. Behind Julie there was a race debut for Amanda Walker, who ran well to break the hour with 57:45 and a debut too for Rachel Deans who clocked 1:05:41. Louise Kennedy struggled with the hills, wind, cramp and minimal training but showed grim determination to complete the race in 1:21:08. 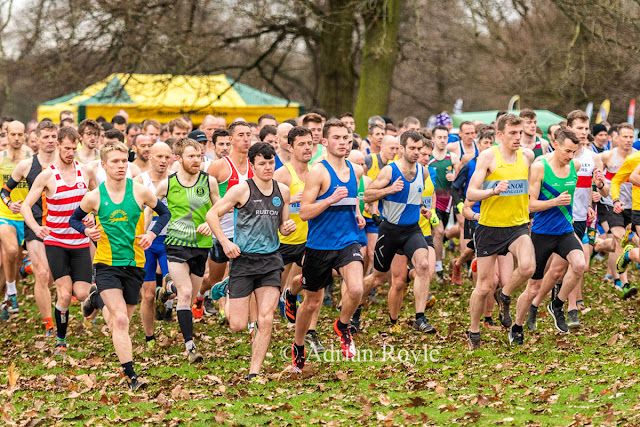 The fourth and final race of the 2019-20 North Midlands Cross Country League took place at Wollaton Park in Nottingham on Saturday 11th January.  Although it was a very blustery day the course conditions were good, with it being mostly dry under foot save for a couple of wet, muddy patches. The course though was still a good test with a climb on each lap up towards Wollaton Hall followed by a pleasant descent. The race fields were particularly competitive, perhaps because it is for those not running the Nationals (also being held at Wollaton Park) it is likely the last cross country race of the season. 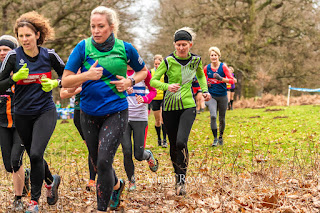 In the women’s 6km long race Michelle Parczuk was first home in a fine 80th place overall. Caroline Davis followed in 105th; Sarah High was 124th; Kate Marshall 159th; and Tracy Webb th. The ladies Vets team came seventh on the day and in the final league standings finished ninth. In the individual league standings Sarah High was an excellent winner of the V55 age category, with Michelle and Caroline finishing a very creditable eighth and ninth respectively in the V45 category.
169 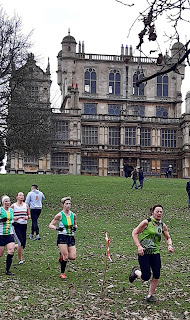 outstandingly to finish ninth in the senior race and eleventh overall – his time of 37:22 over the 10km long course just sixty one seconds slower than the winner Nathan Tweedie of Helptson Harriers. It is the highest ever finishing position by a GRC runner in a North Midlands Cross Country race and could be considered the as one of the club’s best ever performances over cross country. 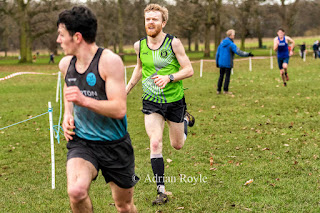 Behind Jonny, Gav Meadows finished 132nd; Chris Toon 215th; Daniel Howson 219th; and Wayne Baxter 246th. The men’s Vets team finished thirteenth on the day, but unfortunately neither the Vets nor Senior team were able to field enough runners over the four races to appear in the final league standings. 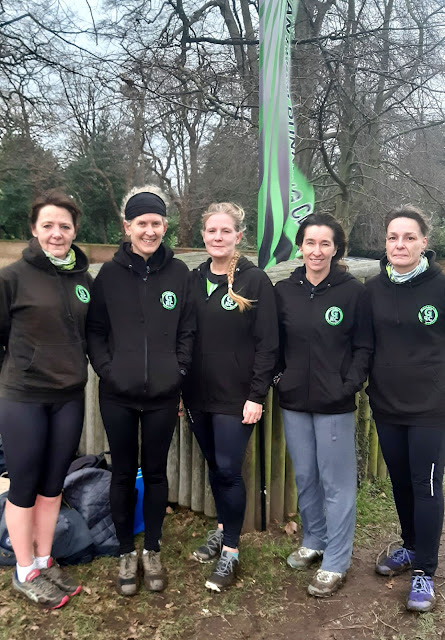 ---
Photos by Adrian Royle used with his kind permission.
Posted by GRC at 11.1.20 No comments: 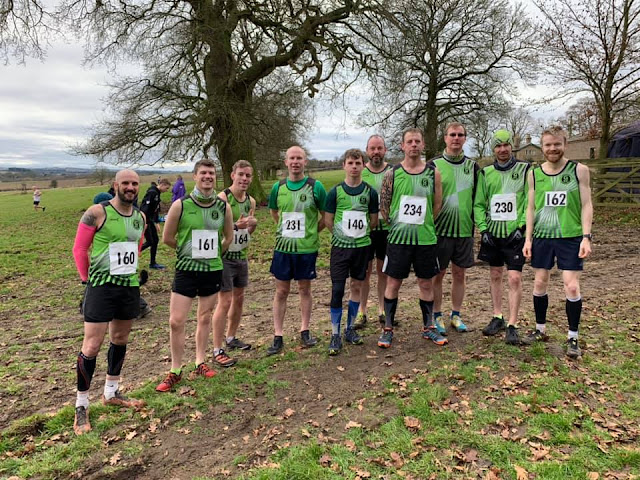 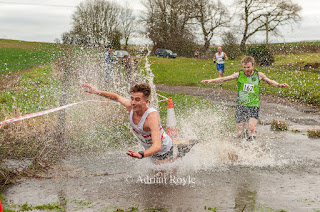 Perhaps surprisingly for a county not blessed with an abundance of hills or demanding terrain, the constantly undulating course has earned something of a fearsome reputation. Local athletics photographer Adrian Royle, who once again based

himself at the infamous crossing of the particularly swollen River Bain, describes it as an ’awesome course… truly the best in the country - really tough, proper XC!’ The former world class distance runner is bet
ter placed to pass judgement than most and few who ran the course would disagree with his assessment.
Four GRC ladies took part in the women’s races. The Vets race was run with the U17 boys and girls and the U20 women. First home and in a fine seventh place was Michelle Parczuk, followed by Caroline Davis, ninth, and Sarah High twelfth. As a team they finished third on 28 points, just four behind the winners Louth AC. Sarah Chynoweth, who has been injured of late, took part in the separate Senior Women’s race and finished twelfth. There were 24 finishers in the Vets race and 19 in the senior race. 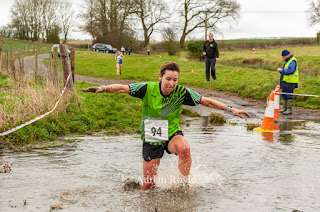 Nine GRC men took part in the men’s races. In the Senior race Jonny Palmer coped better than his nearest rival through the river crossing, putting in another stellar performance to finish third. Behind Jonny, Grant Davies finished ninth, Chris Limmer recovered from literally losing one of his shoes early in the race to finish tenth, and Samuel Jepson-Rivers finished thirteenth. Even without Chris’ result, which is officially recorded as ‘Unknown’ currently, the club claimed the Men’s Senior Team Competition. There were eighteen finishers.
The Men’s Vets race was comfortably the best attended of the morning with 58 finishers. First home for GRC was Joaquim Jeronimo in twelfth, followed by Gav Meadows, eighteenth, Peter Bonner, twentieth, Barny Stretton, thirty-first, and Chris Toon, forty-second. Joaquim, Gav and Peter completed the Vets team that finished fifth. In the U20 race Barney Stretton ran well after being one of the many victims at the river crossing to finish fourth, one place behind the talented Will Tucker of GAC.
------
Action images used with the kind permission of Adrian Royle.
Posted by GRC at 5.1.20 No comments: