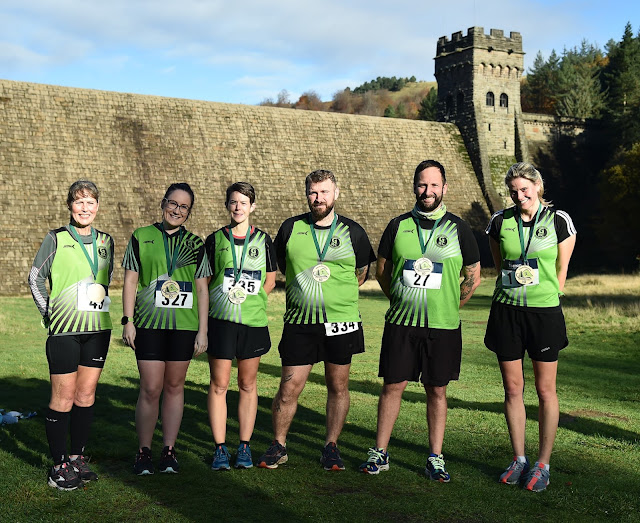 On the 13th November 6 members of Grantham Running Club set their alarms extra early to make the journey to the Derwent Valley in the north of Derbyshire to take part in the Dam Buster 10 mile trail race.

Taking place around the Derwent and Howden Reservoirs, the race is named after the famous 617 Squadron who practiced the low-level flights needed for Operation Chastise (more commonly known as the Dam Busters raids) over the dams due to their similarity to the dams in Germany.

Surrounded by the elevated fells of the Peak District National Forest, the massive and imposing dam of the Howden Reservoir provided a dramatic backdrop to the start and finish of the race which was organised by Peak Runners.

The GRC contingent (who provided the biggest club representation) were quite happy to start at the back of the pack of around 140 runners and intended to take it easy to allow them to take in the breath-taking scenery and autumnal colours.  There were numerous stops during the early part of the race to take pictures as surroundings were too good to miss in the autumnal sunshine, so the pace was certainly more leisurely in the first five miles during which the runners were steadily climbing to approximately 550ft.

Wayne Baxter and Dale Towning ran the entire race together, enjoying an easy first half which was on the road.  As the miles increased, so did their pace on the second half of the route which was trail.  Winding up to a sprint at the end, they crossed line within a second of one another at 1:43:01 for Dale and 1:43:02 for Wayne.

Hot on their heels was Sylv Hull who also had a very easy start to the race but started to pick up the pace in the second half as she enjoyed the slight descent back to the finish and the trail conditions.  Chasing Dale and Wayne towards the end, she finished on a time of 1:44:17 on the course which measured nearly half a mile long, though nobody was unhappy to spend a little extra time out on the trails.

Also finishing strongly were Alison Clark and Zoe Wragg who ran most of the race together after enjoying the sightseeing mood of the first half.  Alison crossed the line in style with a time of 1:51:13.

Zoe took it steady (and plenty of photos) to begin with but gained momentum alongside Alison and finished in 1:52:03.  An extra bonus for the day was learning what a dam looks like.

Rounding off the GRC representation was Yvonne Buckley who maintained her pace throughout the run and finished in 2:02:02 and second in her category.

Every single GRC runner was blown away by the surroundings and thought the event was extremely well organised and friendly, with a wooden medal and amazing free event photographs to take away.  The 5am alarm call was certainly worthwhile, and we will be back, with lots more GRC members in tow.