Given the unprecedented disruptions and cancellations to organised sports across the world as result of the Covid-19 pandemic, it was a pleasant surprise that the 24th annual Caythorpe Dash 10k and 5k survived to take place on Sunday 11th October 2020.

To say it merely ‘survived’ is an enormous discredit in truth. The feedback was full of praise for Race Director Dave Fidler and his army of volunteers and marshals that helped stage the multi-terrain event.

The picturesque, but somewhat testing 10k course starts and finishes at the playing fields in Caythorpe Village, passing briefly through the village of Fulbeck, utilising bridle paths, quiet lanes and a former railway line along the Lincoln Edge.

A pleasantly warm and sunny autumnal morning set the tone for the day, with
runners heading out in groups of six-or-less in ten minute waves, something that has become part and parcel of staging events in this ‘new normal’ Covid environment.

First out and ultimately fastest home for Grantham Running Club in the 10K race was Sam Jepson-Rivers in a time of 43:01. Some way off his best, it was good enough however to secure a top ten finish. 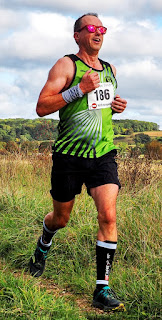 Next home for GRC and ecstatic to be running again, let alone racing, was Russell Maksymiw, who suffered a few injuries over the course of the year, but put in a confidence boosting performance to finish in 47:15. He was followed by Stuart Baty, who was delighted to finally be racing in 2020 and was pleased with his sub-50-minute 49:16, given the over mostly off-road conditions.

First lady and ‘fresh’ from her Virtual London Marathon effort the weekend before, was Nim Jepson-Rivers in a time of 53:58. She managed to pip father-in-law Paul Jepson home. Hampered by some hip pain his time of 54:26 Paul was not quite at the level of his impressive virtual racing form of the summer. 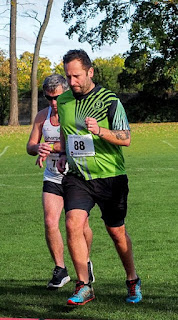 Sylv Hull showed that her recent training has served her well with a welcome return to form, clocking 58:10. Happy with her performance, she vowed to return to better her effort next year. Stephen Fay was full of plaudits for the marshals and the jelly babies gratefully received at the top of the infamous Gorse Hill Lane climb. Struggling with knee pain in the latter stages he battled to the finish, clocking 59:24. Falling foul of some misdirection, the unlucky Wayne Baxter ended up running an extra kilometer. Despite the hiccup his recent summer trail adventures paid dividends as he was still able to finish in 01:00:37.

Separated by just twelve seconds Jacqueline Anderson (01:04:39) and Kate Marshall (01:04:51) echoed the general good feeling of finally being able to race this year, in particular Kate whose grand plans of a debut marathon in 2020 have been put on ice for now. Behind Kate, Tracy Webb was another to enjoy her foray back into the racing landscape, finishing in a time of 01:07:35. 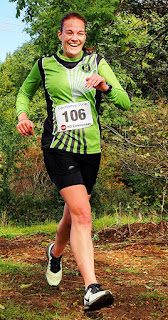 In the supporting 5K race, which saw a modest field of seventeen finishers, arguably the results of the day for GRC were provided by Stewart Pick (21:30) and Vicki Ball (24:42) in the 5k event. They finished second and third respectively overall with Vicki winning the
female section.

Stewart being particularly delighted to clock a time faster than both his official 5k road time and that of his best parkrun effort. Vicki was thrilled to unexpectedly take the lady’s top spot with her canine companion Monty who, at times, hindered more than supported Vicki, showing a complete lack of direction in the opening stages!

Behind Vicki finished Fraser Marshall (25:27), who made the race very much a Marshall family affair by running most of the course with his youngest daughter, Grace. Fraser and Kate’s eldest daughter, Olivia, also put in a fine run to finish fourth overall.

The 10K race was won by James Ross in 35:20, with Harriet Johnson the winning female in 44:46. The 5K race winner was Christopher Pell of Cambridge and Coleridge in 18:06.