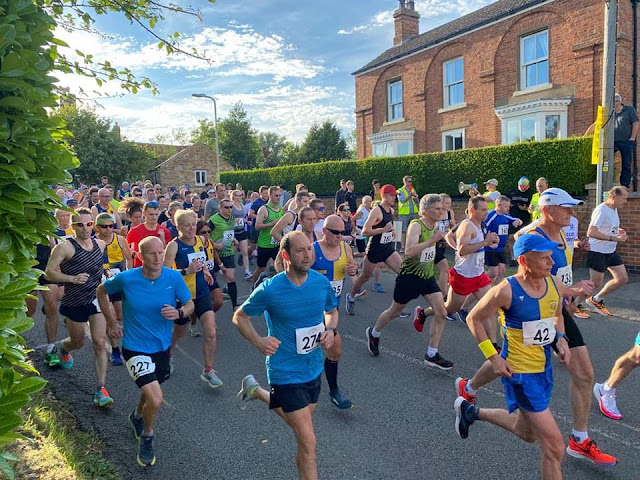 Grantham Running Club members were out in force on Friday, 8th of July when 26 runners tackled the Whissendine 6ix. The race follows a six-mile circuit of country lanes from the village out to the borders of Stapleford Park and back. It has been an annual fixture in the racing calendar since 1985 and is known as a tough course due to the 93 metres of elevation. Add into the equation 23 degrees of heat (73 degrees F), and there was never any doubt that the 2022 race would be a challenge.

However, as many of the runners would later mention, the rousing support from the locals, the prize of a beer and decorated glass from race sponsors Grainstore Brewery in Oakham, plus the excellent sausage sizzle organised by the Brownies at the finish more than made up for the punishment from the course itself.

Starting on the outskirts of town, runners climbed through the village to the highest part of the course, then headed north on a long descent to the boundary of Stapleford Park. A sign on the verge announced "Lowest Point", which, anticipating the punishing climbs ahead, many competitors interpreted philosophically rather than geographically. The hill at the halfway point was particularly gruelling, involving an approximately 40 metre (131 ft) climb in just 0.7 km (nearly half a mile). After a final climb back into the village, the runners enjoyed the downhill to the finish by the river.

First home for GRC was Samuel Jepson who turned in an impressive performance of 34:11, 45 seconds behind the winner, despite injuring his foot in the first two miles. Russel Whittaker was just 50 seconds behind him, taking a very pleasing 10th place overall in 36:01 in his first attempt at the 6ix.

Andrew Pask and Peter Bonner came in 22nd and 23rd in 40:31 and 40:33 respectively, with Stef Latter in 40:51. He commented, "If you can liken races to amusement rides, this was definitely the roller coaster!"

Next was Rob Howbrook who put in an impressive time of 42:29 despite having run a cracking 5k at Stamford 48 hours earlier.

David Summers crossed the line in 45:41, closely followed by the first GRC woman finisher, Hannah Whittaker in 45:46, to grab 57th place overall. Michelle Parczuk finished her first 6 mile race in 46:38 and declared herself super pleased with her time, observing that it seemed that two glasses of wine at lunch time was very effective race preparation. A shade under two minutes later, Stuart Baty crossed the line for a time of 48:03 and was overheard six miles too late recalling that he'd said after the last time he wouldn't be entering again.  Paul Jepson was delighted with a 25 second PB for a time of 50:22. “Not bad for a man that’s just retired!”

Caroline Davis was the 101st finished in 51:20, with Thomas Napier 20 seconds behind her, and Caroline's husband Paul 30 seconds behind that for 52:11. Sylv Hull declared was very pleased with a four minute improvement since she last ran the 6ix in 2019, observing the hills were 'brutal'. Sinead McDonnell followed in 53:08, Naomi Rivers in 53:12 with Sara High completing a trio of GRC women in 53:35.

Fraser Marshall wasn't too unhappy with 55:19, considering he was nursing a slightly sore hip, but is hopeful of doing better the next time he enters. Richard Urquart came in 56:10 seconds later followed by Kate Marshall in 56:24, which was impressive given her legs were still recovering from running 108 km in 24 hours just two weeks previously.

Ros Sadler, finishing her debut 6ix in 57:29, claimed to have enjoyed the brutality of the course, but said she was glad to have kept her lunch down crossing the line! Tracy Webb crossed the line in 01:06:18 followed by Julia Hallam, who was very satisfied with her time of 01:06:30, describing it as a "good training run with good running friends". Yvonne Buckley, who received the same time as Julia struggled with the combination of heat and hills but enjoyed the support from the villagers.

Husband Brendon Buckley was the last of the GRC runners home in 01:14:03 to a great round of applause from his club mates. Only recently returning to running after a prolonged absence due to injury, he was just looking to get more miles in his legs rather than having any expectations of a fast time, and described it as a "great little race despite the hills!"

The race was won by Jason Barton of the Stilton Striders in a time of 33:25. The first woman home was unafilliated runner Helen Pape in a time of 38:00.