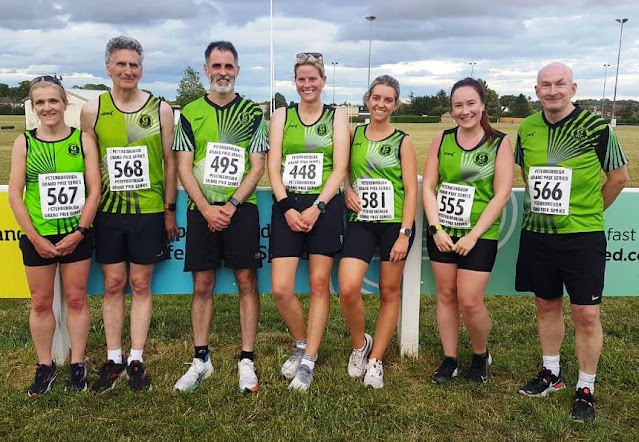 On Wednesday 6th July, 7 members of Grantham Running Club headed southbound down the A1 to partake in the second race of the Peterborough GP Series, hosted by the Stamford Striders at Stamford Rugby Club.

There were 219 participants taking part in the 2-lap course which took them through a housing estate to start, then onto a stretch of downhill along Tinwell Road, followed by a tough incline back up Roman Bank.

First home for GRC, and coming second in his age category, was Robert Howbrook in an impressive time of 20:37.

Second back was Richard Payne, who was pleased with his progress since the recent GRC 5k event, coming in at 21:43, a 12 second improvement on his previous 5k time.

Third in, and the first GRC female to cross the line, was Catherine Payne who finished in 22:24, also taking second in her age category.

Next was Robert McArdle who achieved a time of 22:52. A 3 second improvement on the previous GP series race a fortnight before.

Sylv Hull was next back for the green army in a time of 25:24, an impressive 1 minute 30 second improvement on her same performance in 2019, giving her a course PB.

Vicki Ball was pleased to take 56 seconds off her previous GP race time 2 weeks prior, finishing in a time of 25:52. The final member of GRC was Zoe Wragg who finished in 26:37, a 13 second improvement on her last 5k race at Grimsthorpe Castle.

First male back was Stuart Haw from PANVAC in a time of 15:41 and first female was Sarah Caskey also from PANVAC, in 18:51.

The next race in the series is on the 20th of July and is being hosted by PANVAC at Nene Park (Ferry Meadows).