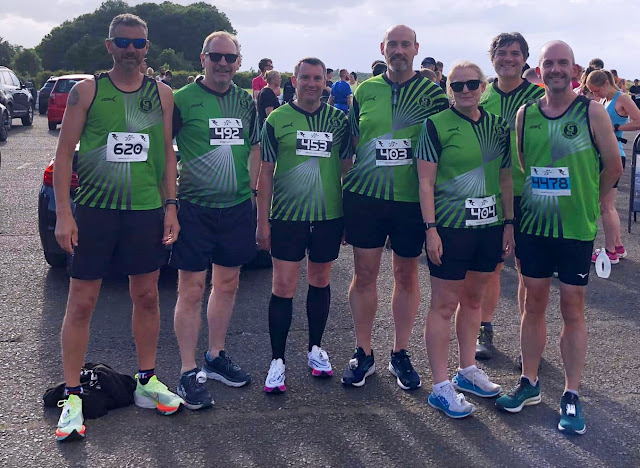 The annual Leicestershire Chase the Sun multi-distance running event tempted 8 Grantham Running Club members to the airfield at Prestwold Hall on Thursday, 9th June. While the previous year's event had been cold, wet and windy, this year's was at least dry and warm. Runners that warmed up alongside the finishing straight soon discovered that what was predicted by the Met Office to have been a moderate breeze was in reality, a strong headwind that made the final kilometre of the 2.5 km (1.5 mile) circuit extremely challenging.

Daniel Pearce was the only GRC runner to tackle the 10 mile event, necessitating six laps of the course. He finished in 6th place with a time of 01:10:51 and first in his age category of V35. The winner of the 10K was James Ford in 58:42. First female runner was Elizabeth Burgess in 01:15:14. "I had to do that six times," he said to his club mates upon finishing.

The 10k and 5K races were started together, half an hour after the 10 mile race. Men's V55 runner Alan Carley was first of the GRC athletes to finish, in a time of 21:41 to claim 9th place, second in his age-grading.

Stuart Baty achieved 23:07, coming first in the V50, for 12th place overall. "Well, that was a windy one," he understated afterwards, before adding, "Brutal." He would not be the last to describe the conditions on the final straight in that way.

Tommy Napier followed in 13th position, coming first in the V60 category with a time of 25:37. Fraser Marshall completed a trio of GRC finishers in 14th position for 25:43, second to Stuart in the V50 category and a personal best at the distance, but following recent good form, he couldn't help but be slightly disappointed to have not run sub-25 minutes.

Kate Marshall, the only female GRC runner to attend Chase the Sun this year, also got a PB with a time of 27:38, coming 21st overall, and first in the women's V45 category. She was also slightly dissatisfied with her time, having hoped to have run a sub-27-minute time, but like her husband, being frustrated by the strong wind.

The 5k was won by Daniel Lloyd of Crewe & Nantwich Running Club in 16:03, a personal best of some seven seconds. First woman home was Jenna Williams of Southend-on-Sea Athletic Club in 19:41.

In the 10k race, Mark Rice, testing his leg after a recent hamstring issue, experienced considerable discomfort halfway around the first lap and elected to withdraw rather than risk serious injury. Stefan Latter was the first man in for GRC, bagging 10th place with a time of 42:32, second in his V45 category. Gav Meadows came in two places later in 43:11, also second in his age category of V40.

The 10k was won by Matt Crossman of Nottingham University in 35:35. First female was Hannah Jones in 46:44.