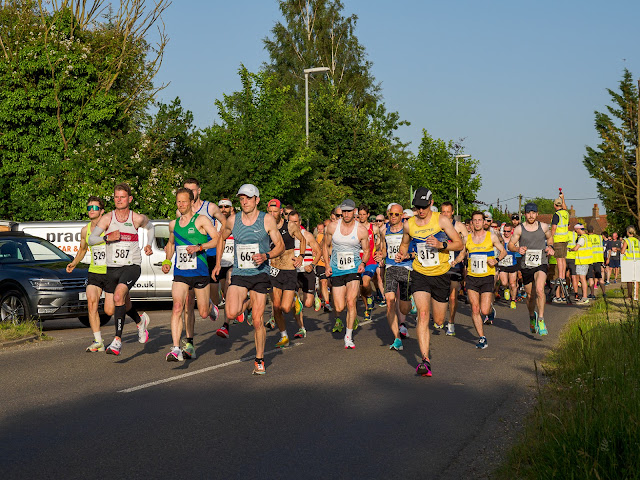 Following a 3-year enforced hiatus, some 550+ runners, volunteers, medics and spectators enjoyed the sunny weather and high temperatures for the Summer Solstice 10k.  The event, which is Grantham Running Club’s flagship race, took place in the quiet lanes around Long Bennington on a boiling Friday June evening and runners were treated to excellent support from residents who also kindly turned on their hoses to cool everyone down.

First of the GRC members to cross the line was Russel Whittaker who has been enjoying the benefits of his training regime.  His time of 37:24 netted him an impressive overall place of 21st.

Alex Curtis continued his run of excellent results with a time of 40:44.

Sam Dodwell is another GRC runner who has seen some stratospheric progress in the last few months was next back in 41:11, a little off his PB but given the conditions he was still happy.

The first lady to come back for GRC was Penny Hodges who has been turning in some amazing results following a return to training.  Her time of 45:42 netted her 7th place in the women's race.

Russell Maksymiw made a welcome return to racing following a long-standing injury with an impressive 48:23 with plenty more to come as he continues his recovery.

Hannah San Hose found the heat somewhat taxing so slowed a little in the latter stages but nevertheless posted a sub-50 minute time of 49:47.

Esther Fraser-Betts defied all logic to post a PB of 53:02 in the heat.

Holly Wragg was pleased to cope with the intense heat to complete in 1:08@20.

Jordan Skelly of Lincoln Wellington AC was the first runner back in a quite literally scorching time of 31:46.

The first lady back was Catherine Charlton of Notts AC in an amazing time of 39:20.

Runners were treated to a bespoke medal and bottle of beer and the race village had a barbecue, bar and various vendors, giving everyone a reason to stay after the race to enjoy the atmosphere and warm evening.

First time Race Director Sam Jepson sends his thanks to the Long Bennington Playing Field Committee and Parish Council for the use of the facilities and the club look forward to welcome runners back for the next GRC race the Winter Solstice likely to be December 2022.