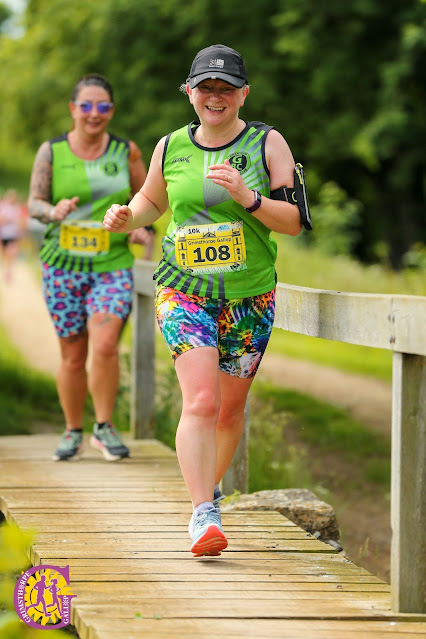 On the 12th June, Grantham Running Club staged its own invasion of Grimsthorpe Castle when 21 members descended to take part in the Grimsthorpe Gallop. Set in the beautiful grounds of the castle, the event hosted 4 distances: 5k, 10k, 10 miles and half marathon. Various Canicross races were also on the agenda.

All four routes took runners through stunning scenery within the private grounds including the castle, lake, tree lined tarmac avenues, ancient woodland, grassed paths and for the 10-mile and half marathon routes a Victorian railway culvert. This terrain coupled with undulating off road routes made a challenging route for the runners, however those who competed in this race the prior year were very thankful for cooler conditions.

First to race was the 5k Canicross which saw Stuart Baty participating with his ever-trusted sidekick Oscar, coming home in 2nd place in 24:03, and Paula Ebbins coming in 4th place with Rosie in 24:38.

Next off for GRC were those competing in the 10-mile race. Julie Gilbert, Rachel Pattison and Rosalind Sadler used the race to make a great kick start to their London Marathon training plan. Teammates CJ Walker, Yvonne Buckley and Julia Hallam utilised the race to build up distance in preparation of the Dovedale Dipper 15-mile race. Sylv Hull enjoyed a scenic trail race after several back-to-back races, and Dale Towning enjoyed returning to racing following a recent injury. First back was Simon Allsopp in a cracking time of 1:31:03; followed by Julie Gilbert 1:38:03 (and first in her age category), Sylv Hull 1:38:59, Rachel Deans 1:40:03, Dale Towning 1:41:06, Rachel Pattison 1:42:05, Rosalind Sadler 1:44:49, CJ Walker 2:14:40, Yvonne Buckley 2:14:40 and Julia Hallam 2:14:41.

The 5k race saw Zoe Wragg return to racing after a recent injury which she was thrilled about, and she achieved a very respectful time of 26:50. Rebecca Rice also competed in the 5k race which saw her come home in 41:37.

The only participant in the half-marathon was Alex Curtis who stormed round in 1:36:39 which netted him 4th place.

All runners were full of praise for SBR events who consistently deliver amazing events in fantastic locations. The free event photography and rainbow medal ensured all participants came away with great keepsakes to remember the event by. Members are already planning their return distances for next year, along with a repeat of this year’s team building post-race picnic and ice-cream stop which was a huge hit by all.