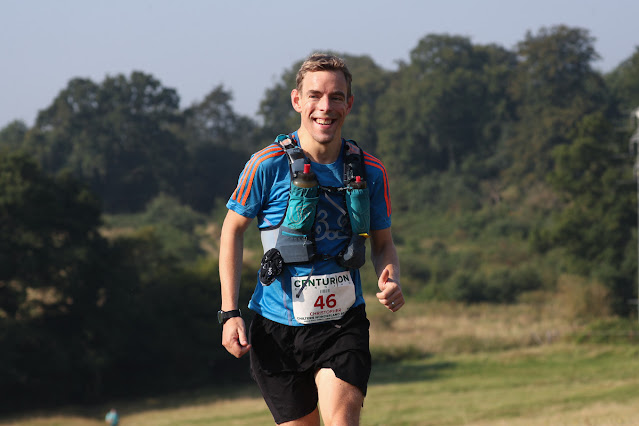 On Saturday 18th September Chris Limmer took part in the Chiltern Wonderland 50mile race. Starting in the village of Goring on Thames in Oxfordshire the route comprised of a circular route taking in the hills and trails of the Chilterns with sections on the Chiltern way but also the Ridgeway and the many trails that linked the two. Chris and the other 211 starters were greeted with a misty and cool start ahead of the race start but the forecast was for it get warmer as the day progressed.

Chris’ race began just after 8 with a majority of the other competitors all wanting to make the most of the cooler conditions and the first 10mile passed with Chris and the other runners all in a positive mood as the route ran along the Thames Path before climbing into the Chiltons. Which greeted them with the spectacular trails and largely isolated scenery that inspired the organisers to name it the Chilton Wonderland 50

Another hour or so later and with the temperature increasing Chris arrived at the second check point with nearly 18 miles done and with the legs starting to warm to the task of carrying him successfully to the end of the course. The next couple of sections met the pre-race expectations of being the most challenging of the entire course. Longer sections in the warm sunshine, some technical climbs and descents made it hard going. Indeed, there was no light relief around the half way point. Having just descended into the small village of Turville (the village best known for being Dibley from the sitcom) there was the steepest hill of the entire course. A couple of miles later and with his water bottles emptied Chris arrived at the 3rd checkpoint at Ibstone after nearly 4 and half hours and 26  miles of running in real need of refuelling. With a generous handful or two of fruits and nuts and plenty of water Chris was able to resume his onward progress. At this point he had climbed from 71st at CP1 to 46th and was overtaking others but didn’t appear to be losing any positions.

Though the warm weather still made conditions a challenge for the runners, when there was shade and conditions allowed, Chris was able to run well and make up ground on other runners. Another 3hrs and 15miles had passed when Chris arrived at the final check point. Fully refuelled and with his bottles refilled Chris pushed on, knowing that with a bit of luck and by summoning reserves of both mental and physical strength he could finish under 9hrs. He had around an hour and 40mins to do the last 9 or so miles but the lack of shade again and narrow trails littered with tree foots threatened to jeopardise his attempt at the sub 9 hour time.

With about 2 miles or so to go and back on the Chiltern way that led back to Goring Chris pushed on. Finishing the last of the contents of his water bottles, pumping his arms, lifting the legs and surging on the fast downhill section. With about half a mile to go he knew it would be very close and a finally lung busting run through the village got him back to the village hall just before 9 hours and in 23rd place. Although Chris’ official time was 9:00:33 this was due to him stopping a metre or so short of the official timing scanner, Chris was delighted to have performed so well and to have given everything that he could on the testing course. The race was won in 7hrs 20 by one of the pre race favourites Jordan Skelly who won by just under 2minutes over the second place Julien Cazorla. The womens race was won also by one of the pre race favourites Karen Hacker in 8:26:35 having taken the lead soon after the Ibstone CP from 50mile debutant and vet 50 runner Philomel Bennett, whom still ran a fantastic 9:16. In the end 184 runners completed the course under the 13hour cut off.