One of the country’s oldest Athletic Clubs Darlington Harriers (Est 1891) once again hosted their multi-lap 20 mile race to give a competitive outing to runners preparing for an autumn marathon. Taking place around the grounds of South Park in the town which is also pretty old dating back to 1636 before becoming the first formal Victorian park in North East England in 1851 with a promenade long enough to stage the local parkun immediately prior to the race. 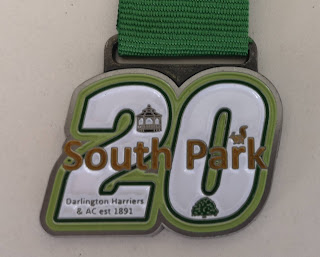 Two athletes from Grantham Running Club joined a high class but mostly local field over 20 laps. Both Robert McArdle and Catherine Payne are in their final high mileage block before next month’s London Marathon and chose this as a final warm-up race for the big day. Personal Bests were not on the cards as the effects of cumulative fatigue would mean the times would be modest especially given the technical nature of the route.

Catherine Payne finished in 2:38:15 which was enough to reward her with another over 80% age grading and third position in the national age rankings as well as top 50 in all women in 2021. Robert was also well down on his best but bagged a top 20 UKA age ranking for his efforts with a time of 2:49:28