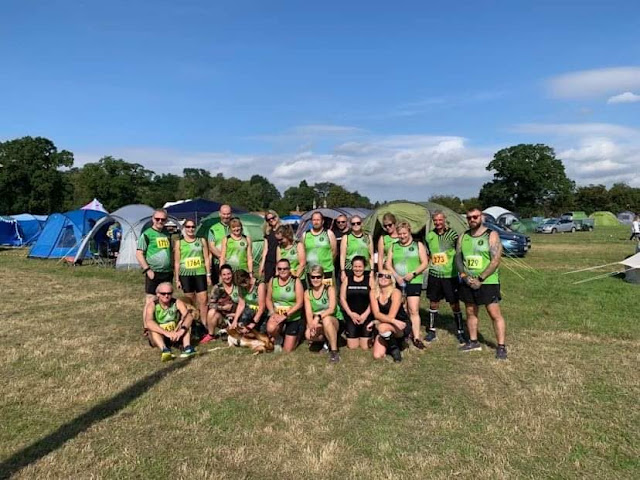 On the 21st September, Belvoir Castle in Leicestershire provided the stunning backdrop to Equinox24, a 24-hour running event which makes a welcome return after cancellation in 2020.  The race takes place around the beautiful grounds of the estate on a mixed terrain loop of 10k and played host to nearly 2,000 runners over the weekend.

Competitors have 24 hours to cover as many laps as possible, as part of a team, solo or in pairs.  For those of a more sensible disposition there are also the stand-alone day and night-time 10k races over the same course.

Taking advantage of a great event on the doorstep, more than 20 runners from Grantham Running Club took part in the event, with a team as well as solo runners.

The main event kicked off at noon in very warm conditions on the Saturday with the daytime 10k and 24 hour race runners all setting off to loud cheers as they ran through the camp before setting out on the main course.

5 GRC runners took park in the 10k day race.  Paul Davis was first back in 34th position out of the field of 170.  He followed this with second helpings later by running in the night-time 10k which he actually completed even faster with a time of 57:24 and came in 26th.  The other GRC runner who was went for a night-time adventure was Yvonne Buckley who enjoyed the headtorch experience and put in a time of 1:14 and 92nd place and also came away with the glow in the dark medal.

Tommy Napier was next back in the day 10k with a time of 1:00:44, a remarkable feat as he had been working his way back to fitness following a bout of Covid which had affected his training and ruled him out of other events earlier in the year.  This put him in 40th place.

Crosisng the line together were Tracey Webb and Tracey Gell in a time of 1:11:57, in 85th position respectively.  They were followed by Fraser Marshall who had been pragmatic about his time following injury struggles which had scuppered his fitness but left him in a respectable 96th position and a time of 1:16:32.

Rounding off the daytime runners was Samantha French who enjoyed her lap to complete in 1:18:31 and 107th place.

GRC also fielded a small team of 5 for the event.  CJ Walker-Lees captained Nathan’s Runners and Walkers, named in memory of CJ’s son who had been a great fan of Equinox24 and a much-loved member of GRC.

Equinox first-timer Dale Towning took the first lap for the team in hot conditions.  Coming home in under an hour he was pleased with his time.  He went on to complete a very creditable 5 laps on tired legs.

Second to go out was Sarah High who set the bar high with a fast lap.  She also achieved the fastest GRC time (out of both the men and women) on ‘That Hill’, the notoriously brutal climb at 4 miles that reduces most runners to jelly.  She continued to run strongly throughout the event and completed 4 fast laps.

Sylv Hull went out next and was very happy to get a PB on the course and completed a further 3 consistent laps.

Fourth to go was team captain CJ who ran two determined laps, but after struggling with some on-going niggles she opted to err on the side of caution and retire, keeping in mind the upcoming London Marathon for which she has been training for months.

Last out was Penny Hodges who has spent the last few months recovering from a nasty calf tear, only to put in a storming time to give the team its fastest lap of the weekend.  She completed 4 laps, including the final lap on Sunday in the pouring rain.  She was joined by her team-mates at the finish and proudly carried the GRC flag across the line.

The team ran through the day and night and completed 19 laps, putting them in 30th place out of 82 in the small teams category.

Solo runners are a special kind of crazy and GRC had its fair share joining in the madness with 11 runners out to test/punish themselves.

Also completing 8 circuits of the course were Rosalind Sadler, Kate Marshall (who vowed to return to get that elusive 10 lap PB) and Nicola Hornby.

Equinox24 is renowned for its welcoming, supportive and friendly atmosphere and is a great experience for runners and supporters alike.  A particular feature is that many runners opt for fancy dress which certainly cheer up what can be physically and mentally tough proceedings.  Spotted out on the course were Mr Blobby, a sumo wrestler and various other outfits.  GRC certainly rose to the challenge and exhausted runners might have been forgiven for thinking they were having a holy epiphany at the sight of a gaggle of nuns and a bishop running round the hills of Belvoir at 3 in the morning.

The event was exhilarating, rewarding, exhausting and incredibly feelgood, with competitors running an amazing total of 6,919 laps, covering 42,966 miles.  It’s fantastic to welcome it back and the free event photography provided everyone with amazing memories to take away.